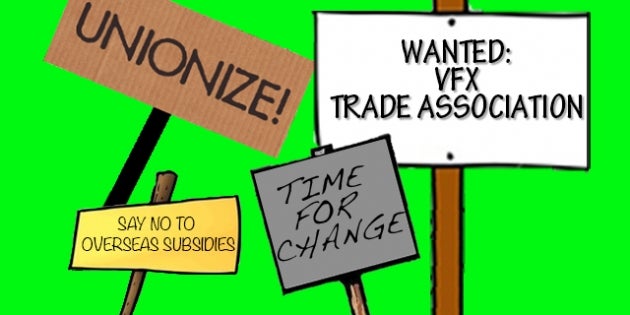 The visual effects industry in Los Angeles has been pummeled by foreign tax incentives that have lured big-budget productions like "Star Wars" and "Guardians of the Galaxy" London, Montreal and other far-flung cities with the promise of lucrative rebates.

But there may be a legal avenue available to the beleaguered industry: tariffs. That's the conclusion of a new report by the D.C. law firm Picard, Kentz & Rowe that the visual-effect industry blog VFX Soldier commissioned with monies raised on social networking sites.

The firm determined that a legal challenge to foreign tax subsidies might be possible — if daunting — and recommended the visual effects industry form an organization to build a case.

The report flagged countervailing duties on films that have benefited from foreign subsidies as a potential recourse. These tariffs, intended to alleviate the damaging effects that foreign tax incentives can have on the domestic production of certain goods, have been imposed in the past on everything from steel to shrimp.

"Subsidies have been a problem in film production for a long time now, and we've seen a lot of closures and bankruptcies and job losses within the last year," David A. Yocis, a partner at Picard, Kentz & Rowe, told TheWrap, referring to companies that include Rhythm & Hues and Digital Domain. "The law is there and it's available for people to use whenever they feel subsidies are harming their country. Now it's up to the industry to decide if this is something it wants to do and whether this is the time to do it."

The firm acknowledged that this case would be different than other examples.

Instead of centering on physical merchandise that is imported into the United States, this theoretical case would focus on subsidized visual effects on feature films that are transmitted digitally from one part of the world to another. Movies today are frequently shot in one country only to have their effects work cooked up in a different country. That means of transmission allows them to bypass U.S. Customs.

Yocis argues that the definition of merchandise is outdated and has not been broadened to include the array of digital products criss-crossing the globe. In order to be successful, members of the industry would have to get the International Trade Administration of the U.S. Department of Commerce, which assesses the duties, to accept that visual-effects work represents a kind of merchandise. That could be a challenge.

"From a legal perspective, there are a lot of hurdles to jump over, but they are all surmountable," Yocis said. "The law goes back to the '70s, so it is not designed for digital products, but we believe that is at least is a path forward and trying it has some possibility of success and not doing anything doesn't have any possibility of success at all."

To raise the $13,000 needed to pay for the study, the anonymous blogger behind VFX Soldier turned to sites like Indiegogo, raising the money from more than 200 donors.

Tapping that network will be vital going forward, as Yocis recommends that people in the industry form an organization to file a petition and to build a case for the ways that subsidies are harming the visual-effects industry.

"I want to make sure the people effected get to have their voices heard," the blogger behind VFX Soldier told TheWrap.

The blogger hopes the study will prompt an industry-wide debate.

Yet the industry itself is divided on the issue of subsidies. Many companies and the head of the the Visual Effects Society, a global honorary society for the industry, have called on California lawmakers to create new tax incentives aimed at supporting post-production work, something the state currently lacks.

Others, such as the blogger behind VFX Soldier, want to see subsidies banned entirely.
There is another drawback to the countervailing duties approach. These fees only extend to foreign subsidies, not ones offered by other states.

"We're against subsidies for VFX in the US also but frankly, most state-side subsidies are for physical productions, not VFX," VFX Soldier blogged in a piece accompanying the study's release. "The only significant subsidies for VFX are for entities that no longer exist: Digital Domain Florida and Sony Pictures Imageworks New Mexico have all been shut down. That's not to say that if the CVD route is successful that studios will try to push work to states that will subsidize VFX work. I will let you know that I am also prepared for that situation."

An industry-wide consensus on the perils or promise of subsidies may not exist, but if a large enough contingent opts to lobby for duties, the process is a relatively quick one. The firm estimates that it takes about 10 to 12 months for the International Trade Commission to make its final determinations about whether or not to impose duties.

"The relief comes quickly," Yocis said. "You will see companies' behavior change as soon as it becomes clear that a case has a chance of succeeding."