Sam Waterston is returning as Jack McCoy for NBC’s revival of the original “Law & Order.”

For Waterston, it will be his 17th season overall playing the District Attorney (he also guest starred on the 19th season of “SVU.”) He joins Anthony Anderson as returning “Law & Order” veterans. They will be joined by new castmembers Jeffrey Donovan, Hugh Dancy and Camryn Manheim.

“Very few casting announcements have ever given me this much pleasure,” executive producer Dick Wolf said. “Since Day 1, Sam has had perfect pitch when it comes to Jack McCoy as a character who both reflects and expands our ability to understand the law. He is the ultimate conscience of the show and I look forward to him emulating the career of New York District Attorney Robert Morgenthau, who served until he was 90. With both Sam and Anthony (Anderson) returning, it shows that the 21st season is merely a continuation of where we left off.” 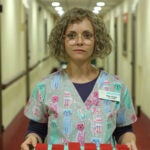 Per NBC, the return of “Law & Order,” which ran for 20 seasons from 1990-2010, “will continue the classic bifurcated format that was created for its original run” and again examine “the police who investigate crime and the district attorneys who prosecute the offenders.”

The series hails from Universal Television, a division of Universal Studio Group, in association with Wolf Entertainment.