Samantha Bee took some time to talk about abortion rights on her TBS show Wednesday night, getting into detail about how some women might be forced to flee to another state to get an abortion if laws like the recent one passed in Texas are upheld in the courts. And, as part of that journey, Bee argued that Supreme Court Justice Amy Coney Barrett is basically a disease.

The late-night host noted that if Roe v. Wade is overturned, “22 states, mostly in the South and Midwest, ‘are poised to ban abortion in almost all cases.'” That would mean women in those states would need to find ways to get somewhere where abortion is still legal — something that’ll be significantly harder to do for low-income women.

“Think of it as a modern-day Oregon Trail, where all the pioneers are pregnant, and instead of dysentery, you die of Amy Coney Barrett,” Bee joked. 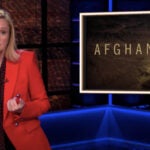 You can watch Samantha Bee’s full segment on abortion rights in the video above.

That said, Bee did note that Coney Barrett is apparently one of the conservative justices leaning toward striking down Texas’s current abortion law, which is the strictest in the nation, as she questions the structure of it.

Specifically, in recent days, Coney Barrett has homed in on the fact that the Texas law limits the legal arguments that co-called abortion facilitators can make to defend themselves when sued.

“I’m wondering if, in the defensive posture in state court, the constitutional defense can be fully aired,” Barrett said.

Bee took the same moment to also poke fun at Brett Kavanaugh’s potential opposition to Texas’s abortion ban, noting that his concern is actually about gun rights, not abortion rights, and approving the Texas law could open up liberal states to restrict other constitutional rights.