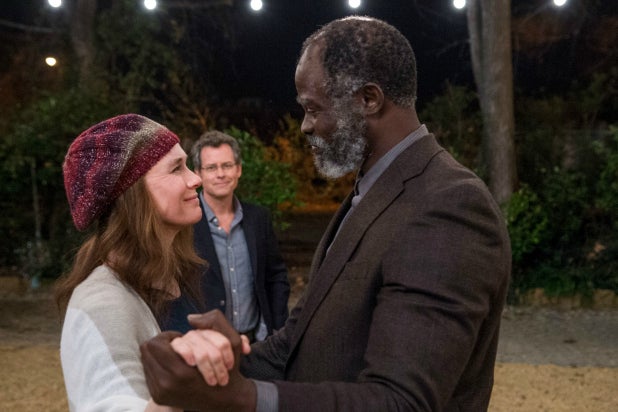 Evangelical Christian filmmaking is having a moment. After the surprise box office success of “God’s Not Dead,” the dam broke and the product has flowed freely, more or less divided into two content streams: insular, badly-made, confirmation-bias movies for the faithful (which, somewhat ironically, are often explicitly created to function as tools for evangelization), and less pointed stories of kindness, forgiveness, and supernatural miracles that feature movie stars more relevant than Kevin Sorbo.

“Same Kind of Different as Me,” based on a true story, is the latter, and, graded on the competency curve many of these films flatly fail to live up to, a reasonably welcome addition to the flock.

Deborah Hall (Renee Zellweger) had a dream that she would meet a wise man on a road, and that he would change her life. And when Hall encountered Denver Moore (Djimon Hounsou), a homeless man who frequented a Fort Worth, Dallas, shelter where she volunteered, she became convinced that he was that man. Enlisting her husband Ron (Greg Kinnear), an art dealer who worked alongside Hall at the shelter, the couple actively sought Moore’s friendship. That process, its complications, and the consequences it spawned, became the basis of a best-selling memoir written by Ron Hall and Moore after Deborah’s death from cancer.

Moore, a former sharecropper, resisted the Halls’ advances for months, justifiably suspicious of their intent. After being dragged down a Southern dirt road as a teenager by white men angry that he had tried to help a white woman with car trouble, he vowed never again to have anything to do with any white person. But slowly the Halls earn a modicum of Moore’s trust, and together they transform the homeless shelter into a more highly functioning location of service for the poor.

Director Michael Carney, making his feature debut and working from a script he co-wrote with Alexander Foard and Ron Hall, has delivered a blandly good looking, no frills, reasonably competent and occasionally emotional Message Movie, one whose message falls directly in line with politically moderate contemporary Evangelical thought. It emphasizes being nice, charitable, and forgiving. It favors a color-blind approach to race relations, one designed to work entirely in favor of the desires of white people, and which is expressed in the film as Good White People quietly delivering argument-ending responses to random Bad Racist White People (one of whom is played a little too convincingly by Jon Voight).

Most importantly, though, its approach to the subject of eradicating poverty is one predicated on the largesse of the rich (one of the first things we learn about the Halls is that they live in a 15,000-square-foot house). Is it nice when wealthy people give money to fund a new homeless shelter? Of course, says the movie. Would it be better in the long run for people of faith to advocate for a truly radical rethinking of economic justice and to adopt as a mission of Christian work the idea that permanent housing is a basic human right? Look, ingrate, we don’t talk about that sort of thing here.

“Same Kind of Different as Me” works more effectively when its talented cast is given freedom to engage on an interpersonal level and its various political subtexts are sidelined (and they almost always are, save for an offhand dig at the “shock art” of contemporary photographer Andres Serrano, whose “Piss Christ” was the cause of a well known conservative Evangelical freakout back in the late 1980s). Kinnear has turned being crinkly, warm, and sadly sympathetic into his go-to trick, and his scenes with Zellweger are tender and believable.

Zellweger, in fact, delivers a gentle, thoughtful, yet headstrong performance as the wife who digs in her heels to get human decency out of the people she cares for the most. Carney allows them their shot at making everything feel believably human. He doesn’t know how to extend that same generosity to Hounsou, unfortunately. The actor stumbles over his dialect, which seems to vary from scene to scene, and he’s directed to a performance that dances right up to the uncomfortable — and again, unspoken — edge of mental health issues.

Fairly abruptly, the character of Moore softens up, quiets down, becomes the wise man of Deborah’s dream, complete with profound monologues about the human condition, and transforms into a comfortably manageable person whose real problem seems to be an angry, unforgiving spirit that merely needed an adamant dose of Christian love to make it better. He’s a grudge-holding angel in disguise, too different to understand, even if the film keeps insisting that we’re all the same in the end.