Samuel L. Jackson might know better than anyone when is an appropriate time to throw out an MF-bomb; he’s certainly done so in a lot of his movies. Jackson endorsed freshman Rep. Rashida Tlaib’s use of the word after Tlaib was criticized last week for using it to describe President Donald Trump at an event in Washington, D.C. last Thursday.

“@RashidaTlaib I just wanna Wholeheartedly endorse your use of & clarity of purpose when declaring your M—ing goal last week,” Jackson said on Twitter Sunday night. “Calling that M—ah a M—er is not an issue, calling that Mu—qah President Is!!!”

Among his liberal and creative spellings of the word, Jackson also added a hashtag that said: “M—-er is too good to waste on that cancer sore.”

The newly sworn-in Democratic congresswoman from Michigan said in front of a crowd of supporters last week, “And when your son looks at you and says, ‘Momma, look you won. Bullies don’t win.’ And I said, ‘Baby, they don’t.’ Because we’re going to go in there, we’re going to impeach the motherf—-er.”

Tlaib’s use of the phrase sparked a debate, with many in the media and other senators and representatives weighing in on the matter. President Trump, who has used the word in the past, called Tlaib’s comments “disrespectful to the United States.”

“I think she dishonored herself and her family using language like that in front of her son and whoever else was there,” Trump said at a Rose Garden press conference last week. “I thought that was a great dishonor to her and her family.” 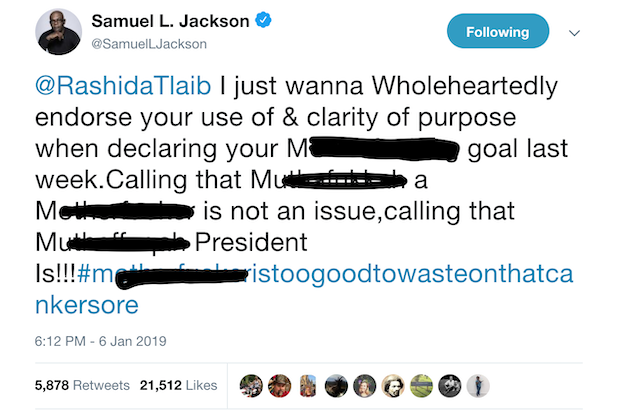