In the almost 24 hours since a shooting at San Bernardino’s Inland Regional Center left 14 people dead and 21 injured, new information is being released, with the motive still remaining unclear.

On Wednesday, a man and woman opened fire at the social services facility. About four hours later, police located a dark-colored SUV and engaged its occupants in a street shootout that killed the two suspects. They were later identified as Syed Farook, 28, and Tashfeen Malik, 27.

“Today’s shooting is the most people killed in a single mass shooting since Sandy Hook,” EveryTown, an organization that advocates gun control, tweeted on Wednesday.

See some of the most recent developments below.

FBI Is Investigating Possible Terrorist Ties
The FBI has uncovered evidence that Syed Farook had been in touch with people with extremist Islamic views, both in the U.S. and abroad, according to a report Thursday in the New York Times. The agency is treating this as a counter-terrorism investigation, especially given the Middle Eastern travel of Farook and his Pakistani-born wife, as well as their stockpile of weaponry and explosives.

The Killers Maintained a Vast Weapons Cache
San Bernardino chief of police Jarrod Burguan told a gathering of reporters on Thursday that, in addition to the 1,600 rounds of ammunition they carried into Inland Regional Center, Farook and Malik stored 6,700 rounds of ammunition and 12 improvised explosive devices in their Redlands home.

The Two Suspects Were Married With an Infant Daughter
Previously, law enforcement officials were uncertain about the status of Farook and Malik’s relationship. Farook’s brother-in-law, Farhan Kahn, revealed that the couple married two years earlier.

But David Bowdich, the assistant director of the F.B.I. office in Los Angeles, indicated that they were not yet married when they arrived in the U.S. in July 2014, with Malik entering on a K-1 visa on a Pakistani passport.

The couple left their 6-month-old daughter with Farook’s grandmother on Wednesday morning, claiming they had a doctor’s appointment.

The Motive Remains Unclear
According to CNN, law enforcement officials have said that the shooters’ motives are still a mystery. The couple did not leave behind a note, there are no indications that Farook’s job was in jeopardy, and neither of them had a criminal record before Wednesday’s incident. It is also unclear whether this was a terrorist attack.

At a press conference on Wednesday, Kahn said he was in utter disbelief that this happened.

“I have no idea why he would do something like this,” Khan said. “I am in shock myself.”

Farook Was Quiet, Barely Interacted With Staff
The Los Angeles Times reported that Farook was described as quiet by his coworkers.

“I would say hi and bye. But we never engaged him in conversation. He didn’t say much at all,” Griselda Reisinger, a former coworker, told the Los Angeles Times.

Maria Gutierrez, another woman who knew Farook, told the New York Daily News that “he was quiet but always polite.”

“We can’t just leave it to our professionals to deal with the problem of these kinds of horrible killings,” Obama said. “We all have a part to play.”

The President also said that the shooters “appeared to have access to additional weaponry at their homes.”

The proclamation was in response to repeated quotes from Republican presidential candidates who said they were praying for victims of the shooting. 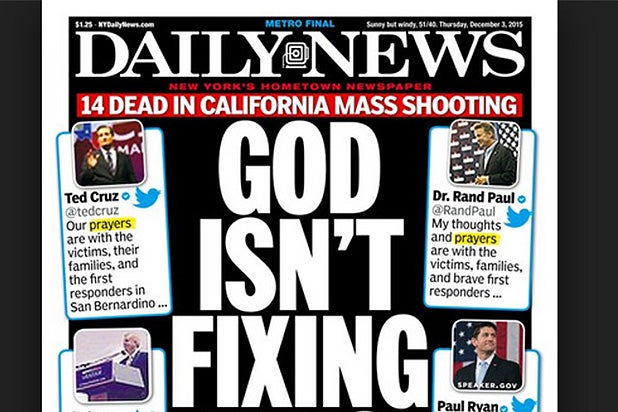 Farook Traveled to Saudi Arabia Prior to Attacks
Farook spent nearly a month in the Kingdom last spring and returned with his wife, who ultimately became his accomplice.

Farook’s coworkers at the San Bernardino County public health department told the Los Angeles Times that the U.S. citizen met Malik online and returned with her after a visit abroad earlier this year.

CNN’s Brooke Baldwin “Sick” of Shootings
In a powerful opinion piece for CNN, the network’s anchor expressed her frustration at having to report on the same tragic story routinely, as she was on air when news broke of mass shootings at Umpqua Community College in Oregon, a Planned Parenthood location in Colorado and on Wednesday in San Bernardino.

“I know it’s my job as a journalist,” she began, “but in situations like these, I’m getting sick of speaking the words ‘active shooter situation.’ I’ve been covering too many of them.”

Baldwin explained that she’s on the air for the two hours a day when kids are at school, adults are at work and “mad killers tend to strike.”