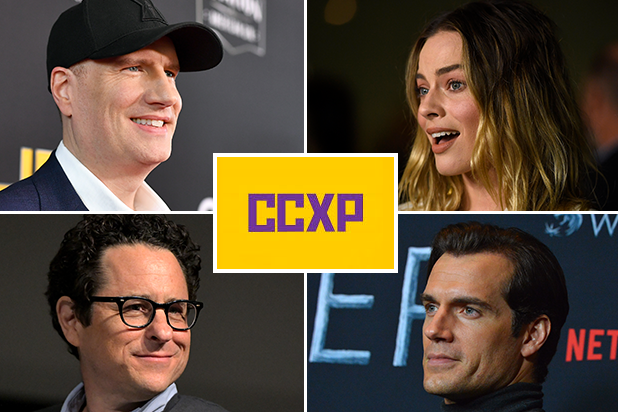 For the first time, San Diego Comic-Con finally has some serious competition as the undisputed heavyweight champion of pop culture live events. That challenger isn’t New York Comic-Con, WonderCon, Dragon Con or any of the other heavily hyped conventions in the U.S., instead, but from the other side of the world.

Brazil’s Comic-Con Experience has quickly emerged as the Southern Hemisphere’s answer to the big show in San Diego,  drawing a crowd of 280,000 to this month’s four-day event that was more than double its SoCal competitor’s. Last year, CCXP was the place Sony chose for the global debut of the first “Spider-Man: Far From Home” trailer and the first public showing of footage from “Men in Black: International.” Among this year’s offerings was the first trailer for Warner Bros.’ “Wonder Woman 1984” trailer and the debut footage from Disney-Marvel’s “Eternals.”

How did CCXP scale in just a few short years? “We are constantly searching for new things and we don’t like repeating ourselves,” CCXP co-founder Borgo told TheWrap. “Innovation is the key, as well as the desire for improvement. Our fans appreciate that and so the studios.”

This year’s CCXP not only featured flashy presentations from Marvel and Warner, but also Lucasfilm, Pixar, Walt Disney Studios, Netflix, HBO and Amazon Prime. How did CCXP attract the major studios to come to Brazil? “We’ve been working with Disney and Warner since our first event,” said Borgo. “Before working as an event company we started as a website in 2000. Studios know and trust our work and our understanding of pop culture. When we decided to take a risk and invest in a festival all of them jumped on board.”

Here are the 5 reasons CCXP stood out from the crowd:

1. Fan-friendly Event – for Even More Fans

Sao Paulo Expo, where CCXP is held, is, simply put, huge, with attendance this year of 280,000, according to Borgo, more than double the 135,000 people the San Diego Convention Center can handle. The size of the venue also means that the central location can accommodate giant audiences but also all its panels and dozens of non-panel events and activations that at SDCC are held in San Diego’s nearby parks, hotels and Gaslamp District businesses because they can’t fit in the convention center.

Couple that larger capacity with what is easily one of the loudest and most enthusiastic crowds of fans we’ve ever experienced in person, and CCXP at least feels like it dwarfs its Southern California inspiration.

SDCC still has some advantages, however. Like the San Diego Convention Center’s storied Hall H, which can handle up to 7,000 people. Comic-Con Experience Brazil’s Main auditorium has half that capacity, roughly 3,500. That’s a lot more fans left out of the biggest presentations of the week. But overall, CCXP is a definitive more the merrier situation. “The Brazilian culture is one of the warmest in the world,” said Borgo. “The fans here show support in a very unique way – and we encourage it. That energy cannot be matched – just like the level of investment in booths, experiences and the overall structure of CCXP. Another thing that we have in our DNA is the desire to keep the Artist’s Alley as our core. It won’t be pushed to the sides like we see in so many conventions.”

Marvel Studios President Kevin Feige attended CCXP for the first time this year — and boy, did he deliver with exclusive, never-before-seen footage from the upcoming “Black Widow” and “The Eternals.” In fact, this is Feige’s first fan convention outside of San Diego since taking the helm of the studio. “It took us three years to get him,” Borgo said. “Year after year, we improved our game, analyzing what went right and wrong and getting studio feedback. Our amazing event in 2018 drew a lot of attention and he decided to attend, with a lot of support and hard work from the local Disney team.”

Right after the Marvel Studios presentation, Lucasfilm showcased an extended chase scene from the beginning of “Star Wars: The Rise of Skywalker” with director J.J. Abrams and cast members Daisy Ridley, John Boyega and Oscar Isaac. Netflix surprised con attendees when Henry Cavill stepped on the main stage to promote his upcoming show “The Witcher.” Warner showcased both the opening scene and the new trailer for the upcoming superheroine film ensemble “Birds of Prey” along with stars Margot Robbie, Rosie Perez, Mary Elizabeth Winstead, Jurnee Smolett Bell and Ella Jay Basco in attendance.

Getting fast-working WiFi inside San Diego’s Hall H is a pipe dream. That is not the case at CCXP as the free fiber-optic internet provided by Brazilian internet provider Oi worked flawlessly both on the CCXP convention floor and the main auditorium.

SDCC has a strict policy against livestreaming panels to give attendees some exclusivity. That is not the case at CCXP, which found a clever workaround that issue. Warner Bros. closed CCXP with the global launch of both the press campaign and new trailer for “Wonder Woman 1984” with director Patty Jenkins and star Gal Gadot in attendance.

The “Wonder Woman” panel was globally livestreamed on Twitter.  “We set out to make a grand epic experience like they made in the 80s,” Jenkins told the excited CCXP crowd. “It’s a visual experience we’re so lucky we got to bring to you.” However, the CCXP crowd got a longer trailer in the auditorium than what was released to the public — thus maintaining exclusivity for con attendees and inclusion for those who couldn’t make it down to Brazil.

The icing on the cake was a pretaped message from “Batman” director Matt Reeves saying hello to con attendees and promising them to bring footage from “The Batman” next year for CCXP 2020 — laying an early marker for next year’s scoop and signaling a scoop over San Diego Comic-Con of an eagerly awaited project. When have you ever heard of a huge superhero tentpole Comic-Con panel being announced elsewhere before San Diego Comic-Con a year out?

And the CCXP team is plotting other ways to build up the experience. “More international events, like the one we did last June in Cologne, Germany, and will repeat in 2020,” said Borgo. “And the continuity of CCXP’s quest for improvement.” Still, Borgo insisted that CCXP doesn’t see itself as a competitor to San Diego Comic-Con and would like to work with the SoCal organizers down the line. “We are fans of San Diego and have been for ages,” he said. “We have a lot of respect for what they do.”