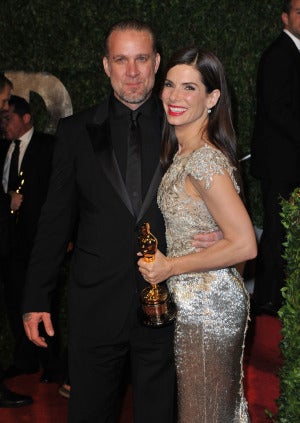 It’s not known yet if Sandra Bullock and Jesse James’ five-year union will end up in divorce court or if they will reconcile, but the shape and size of the scandal’s fallout is beginning to become clear.

The scandal will tarnish James star, but could only intensify audiences’ affection for Bullock, say public-relations gurus and relationship experts.

If media reports are to be believed, James carried on an 11-month affair with Michelle McGee, all while Bullock was shooting the "Blind Side" role that earned her an Oscar for Best Actress and cemented her status as box-office queen.

Reaction to the scandal — just a matter of days after tough-guy James shed tears while Bullock accepted her Oscar — has made it clear that Bullock is winning the sympathy vote.

"It is a shame that a wonderful actress and supportive wife cannot be out in spotlight enjoying the rewards of an Academy Award," Liza Anderson, owner of Anderson Group Public Relations, told TheWrap. "I think (James) may lose the best thing that ever happened to him, personally and professionally."

Betty White, Bullock’s friend and co-star in "The Proposal," echoed those sentiments in an interview with "Entertainment Tonight."

"We’re all deeply, deeply saddened," White told the entertainment show. "At such a high point in her life, it’s tough."

"I think the first thing you heard across this country was a collective sigh of disappointment," Maryanne Comaroto, a radio personality and the author of "Hindsight: What You Need to Know Before You Drop Your Drawers!" told TheWrap. "She’s America’s sweetheart, and we’re all going to stay by her side."

In addition to awards attention, Bullock is coming off a career year. "The Proposal," a romantic comedy co-starring Ryan Reynolds, banked $314 million, and "The Blind Side" has grossed $264.7 million and counting.

She has not yet announced any follow-up projects, but given her recent box office track records, she will have studios lining up to get behind any of her future films.

James, on the other hand, was a decidedly lesser light. Aside from an appearance on the second season of "Celebrity Apprentice" and a stint as the host of Discovery Channel’s "Monster Garage," James is best known for headlining Spike TV’s "Jesse James is a Dead Man."

Experts say his profile was raised by his association with Bullock, meaning the fallout from the scandal could have a toxic effect on James’ career.

"It was a wonderful PR move on his part (to marry Bullock)," Anderson said. "Does he even really have a career? I think its safe to say he lived in a different type of celebrity."

Perhaps the only good thing from James’ perspective is that infidelity does not contradict his previous reputation as a wild man — this is, after all, a guy whose wife before Bullock was an ex-porn star, and made his bones by custom-fitting choppers. Squeaky clean, he was not.

That said, nobody will benefit if the scandal remains in the public eye or if, in the Tiger Woods scenario, more revelations of sexual impropriety on James’ part break.

"Whether they stay together or not — Sandra’s career will see little impact as long as it does not become any kind of legal circus," Dr. R. J. Garis, director of Garis PR & Media Group, told TheWrap. "It would be best for both their careers if they can settle it all without a public court case if possible."

The best thing for both parties may be to abandon the strategy of releasing press releases, public apologies, and pleas for privacy, and submit to something as unpalatable as a press conference.

"When the celebrity does not confront the story, it tends to last much longer," Garis said. "In fact, many tabloid publications and shows actually prefer the star to try and hide … Hiding just extends the media life of a scandal."