As an eight-time Oscar nominee who’s been saluted for everything from a period drama “Shakespeare in Love” to a glam-rock musical (“Velvet Goldmine”), costume designer Sandy Powell has become an Academy Awards fixture over the past two decades. She’s back this year with a nomination for “The Young Victoria,” for which she stands a good shot of taking home her third Oscar. (The first two came for “Shakespeare” and “The Aviator.”)

Powell won the BAFTA Award for costume design on Sunday in London. Thursday, she’s up for a Costume Designers Guild award as well. 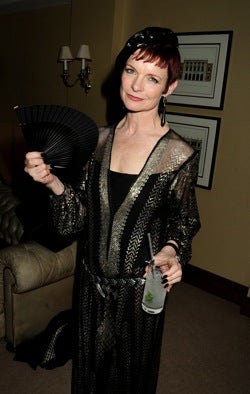 On a movie like “The Young Victoria,” are you torn over how historically accurate your designs should be?
Well, with the most famous dresses that Victoria wore, I tried to be accurate as far as possible. Her wedding dress and her black mourning dress in particular, I tried to get those as close as I could to the originals. But with the others, you have to move away from the original look – you’re not recreating the period, you’re making a piece of entertainment.

So in those cases, I looked at the originals, I did the research, I thought about the period – and then I pretended that I was the designer back then, designing clothes for Victoria.

Weren’t you able to see some of her original clothes in the archive at Kensington Palace?
Yes, which is always good, to have a look at the real things. They have the wedding dress, the coronation dress, the mourning dress … You have to wear white gloves, but they let you handle them under strict supervision.

They’re very fine, very dainty. And, of course, it’s difficult to recreate what you see, because the materials were much finer then. And people were smaller. Victoria was tiny – her clothes are like doll clothes, like a child’s clothes. Emily [Blunt] is tiny, but nothing like Victoria.

When you’re not recreating an existing piece, what’s the starting point for your designs?
Sometimes I’ll start with the fabric. I just get excited by fabric and color, and if I find the right piece of fabric I’ll design the clothes around it.

But mostly, what I tried to do was tell the story through the clothes. Before she becomes Queen, the clothes she wore were sort of dutiful. Her mother dressed her and controlled her and tried to keep her in, so those clothes reflected that: lots of little patterns, very controlled.

And then, when she became the queen, she got rid of her mother, threw her out of the bedroom, and designed some of her own dresses. So I changed the feel of her clothes to make them more sophisticated, more streamlined, less like something her mother would have given her.

You’ve been nominated for eight Oscars now, in a category that always seems to be dominated by period costume dramas. Do you think the Academy should widen its scope a little in its nominations?
I think it’s really unfortunate that the Oscars just nominate period films. The design in contemporary films can be just as difficult and just as important, but they rarely get recognized. I don’t know, maybe there should be two categories, to give contemporary films a chance.

Anything you think was particularly worthy this year?
“A Single Man.” That definitely should have been nominated. I was surprised that it wasn’t – and “Inglourious Basterds,” too.