The Santa Barbara International Film Festival announced the winners of its 2010 festival competition on Sunday, with Stuart Hazeldine’s “Exam” winning for independent cinema and Finland’s “Letters to Father Jacob” picking up the top honor for international films.

Three of the international winners – “Letters to Father Jacob,” “The Wind Journeys” and “Mother” – were submitted in the Academy Awards Foreign-Language film competition, but failed to make the shortlist.

The winning films in the short films category will now be eligible for next year’s Oscars. 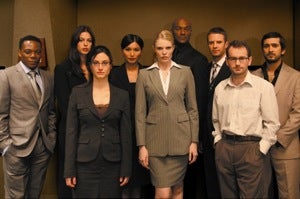 The press release announcing the winners:

Santa Barbara, CA – The 25th Annual Santa Barbara International Film Festival announced the winners of the 2010 festival competition at a Press Conference and Sunday morning brunch at the famed Fess Parker’s Doubletree Resort, hosted by KTYD Radio’s Julie Ramos. The festival, which celebrated its Silver Anniversary February 4-14, was a huge success. By the look of the theaters you’d never know the economy was in the fight of its life as audiences packed the theaters for the last 11 days, proving once again how powerful the art of film can be.

Commented SBIFF Executive Director Roger Durling, "This year’s films proved once again the caliber of filmmaking is higher than ever. The jury was truly challenged in making the final determination."

The winning films are as follows:

The Panavision Spirit Award for Independent Cinema, given to a unique independent feature that has been made outside mainstream Hollywood, went to Exam (US Premiere), directed by Stuart Hazeldine, and starring Luke Mably, Nathalie Cox. Eight talented candidates have reached the final stage of selection to join the ranks of a mysterious and powerful corporation. Entering a windowless room, an Invigilator gives them eighty minutes to answer one simple question. He outlines three rules they must obey or be disqualified. Tensions rise as the clock steadily descends towards zero, and each candidate must decide how far they are willing to go to secure the ultimate job. Winner received a camera package worth $60,000.

UK Director Stuart Hazeldine, who was present to accept the award, commented "We are absolutely thrilled that the first film festival in America that we’ve come to has embraced our film."

The Best International Film Award goes to Letters to Father Jaakob (Postia pappi Jaakobille) from Finland and directed by Klaus Härö. Leila Sten has spent a large part of her life in a Finnish prison. When her life sentence is pardoned, Leila is left homeless. She goes to live with an old priest, who promises to provide for her in return for her help. Father Jaakob finds solace in the letters he receives daily from burdened souls requesting his prayers, and since he is blind, Leila’s task is to read these letters to him. When the letters stop, Jaakob questions the role that God has chosen for him, and Leila finds herself facing a dilemma.

Helena Arstila from the Consulate General of Finland in Los Angeles was on hand to accept the award: "On behalf of director Klaus Härö, I have the honor and pleasure to accept this award. Klaus is a wonderful storyteller who has been inspired by tales of the less fortunate throughout his life. He has a unique capacity to portray human frailty and the good and the bad that all of us have in ourselves in all cultures, in all walks of life. To receive the award here in Santa Barbara is a wonderful honor and I would like to thank you in his name for this distinction."

The Nueva Vision Award for the best Spanish/Latin American film was awarded to The Wind Journeys (US Premiere), directed by Ciro Guerra and starring Marciano Martínez, Yull Núñez. The film is a deceptively simple story: two men on a journey, each with common quests but finding unexpected truths.

Best East Meets West Cinema Award went to South Korea’s Mother (Madeo), directed by Joon-ho Bong, about a mother who desperately searches for the killer that framed her son for a horrific murder.

Best Eastern Bloc Award went to Katalin Varga (US Premiere), directed by Peter Strickland. In the beautiful, otherworldly Carpathian Mountains a woman is traveling with a small boy in a horse and cart, looking to punish those who once abused her. For years, Katalin (Hilda Péter) has been keeping a terrible secret. Hitchhiking with two men, she was brutally raped in the woods. Although she has kept silent about what happened, she has not forgotten, and her son Órban serves as a living reminder. When her village discovers her secret, Katalin’s husband rejects her. With nothing to lose, she is free to seek revenge on the perpetrators.

Best Documentary Film Award went to Enemies of the People, from UK/Cambodia and directed by Rob Lemkin. The Khmer Rouge slaughtered nearly two million people in the late 1970s, yet the killing fields of Cambodia remain unexplained. Until now. Winner received a Blu-Ray interactive authoring of the film by Mozaik Multimedia and Home Planet Productions, valued at $15,000.

Bruce Corwin Award for Best Animation Short Film went to Urs, directed by Moritz Mayerhofer. Urs takes his aging mother on a dangerous journey, carrying her up a mountain to find a better place for both of them.