Spielberg and Goldwyn, who have been friends since age 6, have each uniquely embraced the entertainment industry — Sasha is in a band named Wardell with older brother Max while Emily is a writer’s assistant at HBO and previously worked on NBC’s “Up All Night.”  And now with “Literally Can’t Even,” the duo is pioneering a storytelling platform that’s completely foreign to their parents.

Snapchat, the fastest growing mobile app with a special appeal to millennials, ranks third in popularity with teens behind Facebook and Instagram. Spielberg and Goldwyn’s series adheres to Snapchat’s ephemeral nature with each episode made up of a string of micro video clips that disappear after 24 hours.

In an interview with TheWrap — who was first to report news of the show’s pickup — Spielberg and Goldwyn discussed plans for the upcoming season, whether Steven Spielberg uses Snapchat, how company CEO Evan Spiegel factored in special guest Tom Felton and why they have no clue how many viewers watch their weekly series.

TheWrap: Congratulations on getting picked up for a second season. Or is there a different Snapchat term for getting renewed?

Sasha: I think the goal with Snapchat was not to have it be seasonal and more like “OK, no Season 2 just, ‘Yay more episodes!'” to bring the audience into our world.

TW: Did you get any feedback on your ratings in scoring a second season?
S: I think Snapchat doesn’t like sharing the ratings with us because they don’t want our creativity to be driven by ratings, but more by what our ideas are and what we can try out, and if we’re obsessed with ratings it’s harder to do that. Obviously the ratings were strong enough for a second season.

TW: What makes writing for Snapchat different than TV?
Emily: The biggest challenge is trying to fit a full story arc and character arc into five pages. The process for writing is shorter, but the editing process can sometimes be extremely long because you want to hit a mark that will keep younger viewers interested. But we also don’t want these to be sketches, we want them to be episodes.

TW: What’s the difference between working on a traditional TV set and the Snapchat set?

E: It’s a much more collaborative process. Sasha and I got to sit in the editing room, Rylee (Ebsen, director of video content at Snapchat) will contribute to the writing, the editor will come up with story ideas. Everyone did their own hair and makeup except for on two episodes which involved bigger names  … Costumes were suggested for various episodes, but we used all of our own clothes and our own makeup. 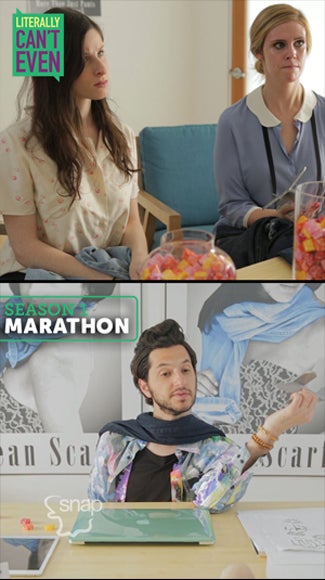 TW: How did you shoot the show?

S: For the interior car shots, those were on GoPro … We felt like we were on a reality TV show. And for the rest of the shoots we used a regular (Canon) 5D.

E: A lot of the stuff is done in the car because we wanted to make it feel like it’s very Los Angeles-centric, where a lot of our lives take place in cars. A lot of that stuff is real life, like me almost hitting people.

TW: Can you tease next season’s celebrity guests?
E: We’re very lucky in that we’ve had a lot of people interested in doing episodes, so we hope to get the same level of great talent that we got for the past season.

TW: How did Tom Felton’s guest spot come about?
E: That was all Snapchat talking to actors. We shot the pilot and then Evan (Spiegel, co-founder of Snapchat) wanted to go forward and fund an entire season, so we had a creative meeting and just talked about some ideas and the thought that I’m a horrible driver came up and it was actually Evan who said, “Wouldn’t it be funny if you got into some sort of driving situation with a celebrity.” So that came out of that situation.

TW: Sasha, you were obsessed on the show — are you a real-life Draco Malfoy fan?

S: I think “Prisoner of Azkaban” is a masterpiece, but I’m not a huge Harry Potter fan. I’ve seen four of the films and read all the books, but I’m not a sniffing-his-sweatshirt or playing-with-his-hair sort of fan. But I can appreciate the fans who are because he’s so charming and wonderful.

E: I knew all the terms. I’m a huge Harry Potter fanatic. Weirdly the roles were kind of reversed there.

TW: What do you hope to see happen to your characters in Season 2?
S: I think it’s funny when we start getting weirder. We started out being kind of awkward, but as the season progressed and as we started getting into the weird fan of Tom Felton and then we had the funeral where I’m frisking people … I like when we go in to Lucy-and-Ethel mode.

E: We live in a time where a lot of comedy is very cynical and Sasha and I love Lucy-and-Ethel slapstick, looking stupid. The first season we really tried to make it so you could drop in to any episode without knowing these characters; there weren’t really any storylines. But we thought it might be nice to add a few recurring characters next season and make it slightly more serialized. And also to make it more about Los Angeles and our lives here.

TW: Do people recognize you from the show?
E: I’ve had two experiences in Ubers. One guy wanted to audition for the show which was the most flattering thing I’ve ever heard because we’re literally casting my friends in my Groundlings class. There is no cattle call audition. And then a bank teller recognized me.

S: I have not been recognized and I’m convinced it’s because I’m 5’3” and no one looks below 5’5” when they’re walking. 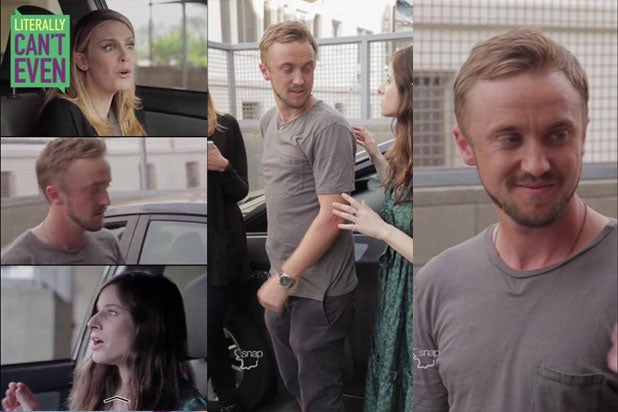 TW: Do your parents even know how to watch the show on Snapchat?

S: My mom is so bad with the phone, my sister and I had to set her ring tone to the alarm so she would pick it up. My dad is really tech savvy so he watches it every Saturday and he loves it.

E: My mom doesn’t know how to use a computer, but my dad and my stepdad, they watch it on their phones. I taught them how to download Snapchat and they watch the episodes. I send them snaps all the time and I don’t think they know how to open them. My family knows the Discover page like the back of their hand, but struggles with basic snaps.

TW: You both have day jobs — how does that fit in with the Snapchat show?
E: I’m a writer’s assistant on an HBO show. Basically what I’m doing at Snapchat is ultimately what I want to do with my life, which is create shows, write shows, produce shows, act in shows. But of course you still have to make money, and I’m learning so much in the writers room on the HBO show. It’s really nice to be able to apply what I’m learning during the week to Snapchat.

S: I’m in a band with my brother, so we were touring for this year. It has been crazy balancing the Snapchat thing and the band, but Emily was also gone the three and a half weeks I was gone working so it’s timed out perfectly. It kind of just feels like Emily and I are in car pool in high school again.

E: We shot something for Snapchat while I was moving apartments yesterday. They shot it at my new apartment with boxes everywhere. It felt very normal to what we’ve been doing with Snapchat. We fit it in when we can because we’re 20-somethings still struggling to make a career for ourselves.