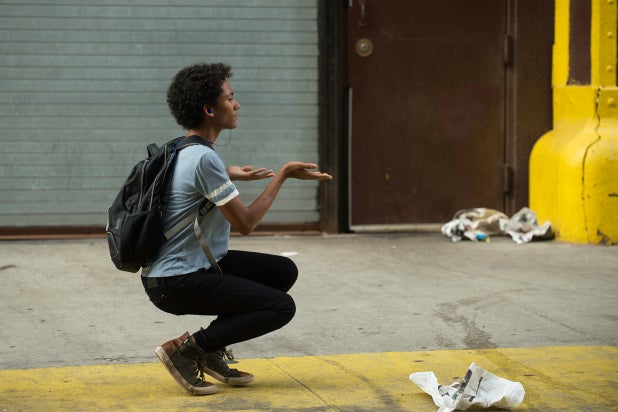 The streets of the West Village in Manhattan have become a kind of haven to African-American gay and transgender youth, and this is the tentative subject matter of “Saturday Church,” a first feature from writer-director Damon Cardasis that functions as a coming-of-age story and a small-scale musical.

Cardasis, who is Caucasian, has said that he was inspired to tell this story after volunteering at St. Luke in the Fields in the Village, which has a church program focused on at-risk youth in the area.

Luka Kain stars as 14-year-old Ulysses, who is first seen at the military funeral for his father. Jocks tease him in the locker room, and when he takes off his pants it is revealed that he is wearing pantyhose with runs in them underneath. A budding aesthete, Ulysses is a dreamer who yearns for beauty. Cardasis effectively gets this idea across in a scene in church where the preacher’s voice starts to fade and Ulysses stares at the colorful plate-glass window images of Jesus and Mary.

As Ulysses walks down the street with his little brother, he gets lost just looking at the blossoms that have fallen from a tree on the pavement, and Cardasis holds this shot for just the right amount of time to make us feel what it is like inside the character’s head. Ulysses puts on his mother’s red high heels and gets caught by his brother, who reminds him that he has been forbidden to wear his mother’s clothes by his stern Aunt Rose (Regina Taylor, “The Unit”).

When the jocks put his clothes in a toilet, Ulysses fantasizes a musical number where they are his back-up dancers. The song he sings is only the repetition of the lines, “You’re gonna see me, you’re gonna love me,” and there is a pleasing modesty about that. It feels like something an actual shy adolescent would fantasize rather than a slick “Glee”-style triumph.

Ulysses gets a magazine to jerk off to, which feels like a very old-fashioned thing to do, but maybe his Internet access is limited. Eventually he finds himself in the West Village out by the piers, where he meets a group of gay and trans kids who take him under their wing. This section of the film feels cautious and under-populated; it would be better if it had a more documentary flavor. Instead it feels like Cardasis has chosen a few figures from this world to observe shyly and respectfully.

In “Tangerine,” a film that takes place in the L.A. version of this milieu, director Sean Baker (also white, it should be noted) gave his main characters lots of space and time to speak for themselves. Baker ceded control to them and let them talk and whoop it up for the camera, and the result was lively, funny, and touching. Cardasis keeps his characters and actors at arm’s length here, as if he’s a little scared of them or worried about seeming like a tourist.

Ulysses gets himself a cute boyfriend very quickly and easily, and this feels more like wish fulfillment than like something that could happen in life. When those same jocks yell “Faggot!” at him, the newly emboldened Ulysses just blows them off with a “vogue” style kiss in the hallway, but this new confidence comes to a halt once his Aunt Rose finds his female clothing and throws him out of the house.

What follows is a scene where Ulysses is picked up by an Asian businessman in the Village that feels like it comes from another movie entirely. Every beat of this scene is very believable and convincing, but it’s so upsetting and so closely observed that it unbalances everything we have seen before. A subsequent confrontation with Aunt Rose is awkwardly written, and Ulysses’s often-absent mother is very weakly characterized.

“Saturday Church” runs a little under 80 minutes, and it feels as if major scenes and plot points have been cut. In that sequence with the jerky businessman and in several of the early scenes, Cardasis proves that he has some talent for both objectivity and subjectivity, but too often this movie settles for mild good intentions and “you go, girl” fantasy, and there’s little room for those things in the very tough world Cardasis is attempting to portray.