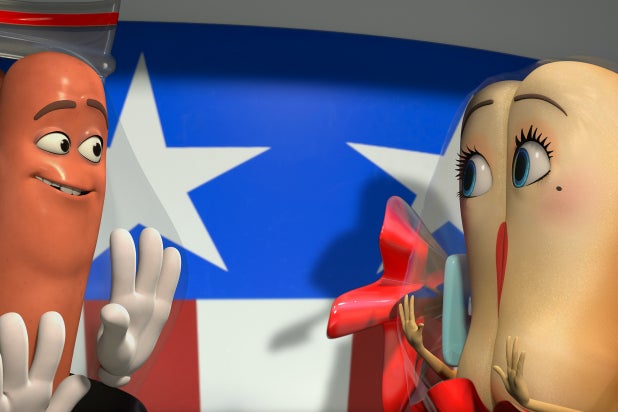 However, that won’t be enough to knock Warner Bros.’ “Suicide Squad” from its perch atop the box office, as the anti-hero mashup could reel in $50 million in its second weekend, despite a wave of blistering reviews.

Paramount’s “Florence Foster Jenkins,” one of two other wide releases this weekend, earned $190,000 in Thursday showings. Disney’s “Pete’s Dragon,” which is projected to be the top newcomer in this weekend’s box office charts, did not have any Thursday preview shows.

This weekend’s wide releases are generally well-regarded, which hasn’t been the case for much of the late summer slate. “Suicide Squad” has been a box office hit despite its anemic 26 percent Rotten Tomatoes score, and “Jason Bourne” won the last weekend in July with a mediocre 57 percent approval rating from critics counted on the same site.

“Pete’s Dragon,” which has a smaller budget and rollout than most Disney films — $65 million and 3,702 screens — will battle with “Sausage Party” to be this weekend’s top newcomer.

The Disney film, which is a remake of a 1977 movie of the same name, stars Bryce Dallas Howard as a forest ranger who meets an orphaned boy, Pete, whose best friend is a green dragon named Elliott. Howard decides to find out the truth about Pete — and his dragon. Oakes Fegley plays Pete, and the cast also includes Wes Bentley, Karl Urban, Oona Laurence, Isiah Whitlock Jr. and Robert Redford. The movie isn’t going to be doing any Thursday night preview shows, but it could deliver an opening weekend gross in the $25 million range with the potential to go as high as $30 million given its strong reviews.

Rogen and Evan Goldberg wrote the screenplay for “Sausage Party,” a raunchy comedy starring a sausage named Frank — voiced by Rogen — who embarks on a quest to find out the truth behind his existence. The movie, which has a star-studded voice cast including “Saturday Night Live” alums Kristen Wiig and Bill Hader, as well as Michael Cera, James Franco, Danny McBride, Nick Kroll, Craig Robinson, Edward Norton and Salma Hayek, will open in more than 3,000 theaters.

And while “Pete’s Dragon” is expected to top “Sausage Party” among the weekend’s newcomers, the adult comedy could benefit from strong buzz and word of mouth — which has propelled Rogen films past expectations before. Fandango’s “Fanticipation” survey of 1,000 moviegoers has “Sausage Party” outranking “Pete’s Dragon.” “Sausage Party” could easily do $20 million — its strong Thursday should help — even though Sony has a more conservative estimate of $15 million.

“Florence Foster Jenkins” should place a distant third, but it should be able to draw an older crowd that isn’t exactly lining up for superheroes or cartoons. The film, which stars Meryl Streep as an heiress who buys herself an opera career despite her lack of talent, will open at only 1,528 theaters, which will limit its box office potential. Still, it should deliver an opening weekend gross of between $5 million and $8 million.

Also Read: Meryl Streep Explains Why She Wanted to Sing So Badly in 'Florence Foster Jenkins'

The movie’s $190,000 preview compares to the $200,000 Streep’s “Ricki and the Flash” made during its Thursday screenings when it opened last August. It went on to reel in $6.6 million during its opening weekend.

However, even if all three newcomers perform at the higher end of expectations, “Suicide Squad” is likely to put up another huge number. David Ayer‘s DC Comics film brought in $133.7 million during its opening weekend, an all-time August record. It continued that momentum by setting the August Monday record of $13.1 million this week, topping the $11.7 million “Guardians of the Galaxy” scored the Monday after it was released in 2014.