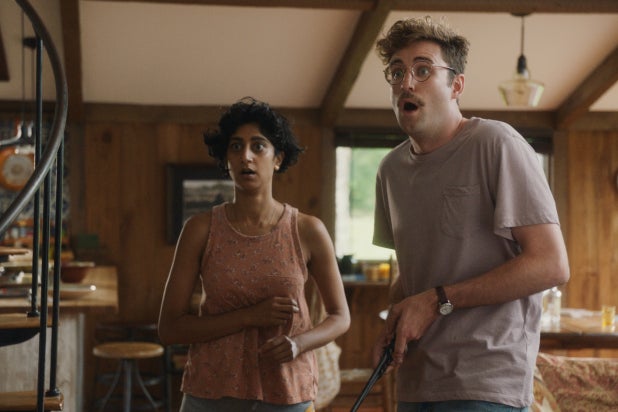 How many times have your friends — or you — sworn to take the week off Twitter, only to come rushing back because some huge cultural event has taken place, and you just gotta see all those hot takes? That’s the basic premise of the comedy “Save Yourselves!”, only it’s not a presidential blunder or an awards-show gaffe that our heroes miss while on a digital break: It’s an alien invasion.

And while that’s ultimately a premise that feels like it would have resulted in a great 45-minute short as opposed to a mostly-good 93-minute feature, the movie does find new ways to explore its central theme and to plumb the psyches of its central characters, Jack (John Reynolds, “Search Party”) and Su (Sunita Mani, “GLOW”).

Writer-directors Alex Huston Fischer and Eleanor Wilson very realistically craft this couple; Jack and Su’s inability to hold a conversation without looking something up on Google or being distracted by incoming texts never feels like exaggeration or lazy Millennial stereotyping. You are these people, or you know these people, but either way, they exist in the world. Jack and Su are also aware that they’ve become “those people,” and when a friend offers the use of his family’s cabin upstate, they seize upon the opportunity to get out of Brooklyn and to turn off their screens for a week.

Watch Video: 'Save Yourselves!' Trailer: Unplugged Millennials Manage to Miss an Alien Invasion

Of course, Su’s idea of disconnecting from the internet is to just copy webpages longhand into her notebook, so that she can spring relationship quizzes onto an unsuspecting Jack. He eventually plays along, and the two begin having open, real conversations about their desires and their dreams. Su isn’t entirely honest about one transgression, however; she turns her phone on just long enough to get some strange voicemails from her mother about New York and Los Angeles being overrun by creatures that “aren’t rats.”

What Su assumes is some sort of Fox News-inspired nonsense turns out to be a full-on alien invasion, and before long Su and Jack have to muster something resembling survival skills, whether it’s relying on a vehicle that’s stick-shift (which Jack has no idea how to use), assembling go-bags (that feature microgreens), or finding the rifle in the basement (which both agree is more trouble than it’s worth).

Watch Video: How 'Save Yourselves!' Filmmakers Imagined a Couple in Quarantine Pre-COVID

It’s always a challenge to meld comedy with another genre, even though the results can frequently be delightful and provocative, as they are here. Not just anyone can manage the mix — too funny and you undercut the stakes, too much dedication to science fiction/horror/action and you kill the laughs — but Huston Fischer and Wilson generally nail the proportions.

It helps that cinematographer Matt Clegg captures the bucolic countryside in a way that makes it the last place you’d imagine terror raining down from the sky (not unlike “A Quiet Place” did), and that the fuzzy aliens themselves (Su and Jack refer to them as “poofs”) are some of best, and creepiest, creatures-on-a-budget since “Attack the Block.”

Watch Video: 'Search Party' Season 3 Trailer: Dory and the Gang Go Viral After 'The Most Fabulous Public Arrest Ever'

What truly anchors “Save Yourselves!” is the specificity of the two leads and the sharpness with which Mani and Reynolds perform the roles. From an early scene of argument and apology — in which Jack asks for forgiveness in the vaguest way possible before Su forces him to cite his specific transgressions — to the surprising finale, these actors take what could have been two-dimensional hipster jokes and make us care about whether or not they get through the destruction of mankind still standing.

There are plot twists that get the couple out of the house and into situations that comment upon their as-yet-unmet life goals, but the movie does periodically run out of steam. Thankfully, while it might occasionally stall — like that manual-transmission getaway car — “Save Yourselves!” does work up enough momentum to go into orbit.