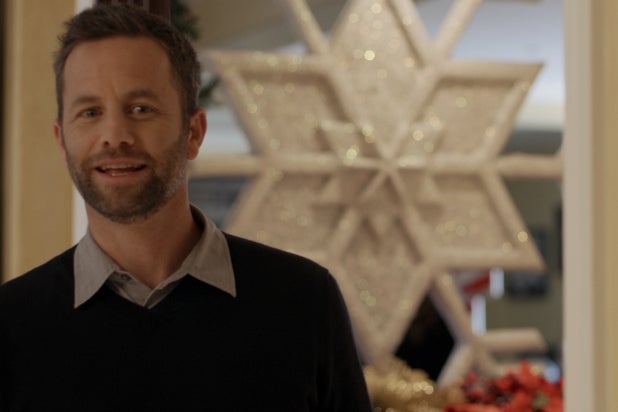 It’s not a movie so much as it’s an extended Sunday school sermonette, with Cameron teaching his born-again brother-in-law not to dislike Christmas trees, Santa Claus and gifts, because — as “Saving Christmas” is about to expend a great deal of effort to prove — all of those things celebrate the birth and life of Jesus. (Did I mention that this straw man, who can’t win an argument to save his life, is named Christian?)

Cameron does not want to hear about your history or your science, by the way. He challenges Christian (played the film’s director, Darren Doane) to back up his assertions that Jesus wasn’t born in December, or that Christmas trees are a holdover from celebrations of the solstice, and all Christian can do is stammer and blubber in the face of Cameron’s superior knowledge.

Cameron’s answers all come from the Bible, that same book that has previously been used to excuse slavery, racism, imperialism, the destruction of the environment, and the subjugation of gays and women. For instance, there are trees in the Garden of Eden, and Jesus was crucified on planks of wood, so ta dah — Christmas trees! Christian is too busy being a whiner and a sad sack to mention Saturnalia or the solstice, and as Cameron reminds us, “The last time I checked, God created the winter solstice.”

So yeah, it’s like that. And it’s like that over and over and over again, whether it’s Cameron describing Saint Nicholas as some kind of wrestling champ defending the idea of Jesus’ divinity, or Kirk explaining presents under a tree as looking like the skyline for a new Bethlehem, or defending Christmas-related materialism because the holiday is built around a deity being made manifest.

The oft-repeated formula here is to take something that exists and is beloved, and then work backwards to find a way to make it Biblically-inspired. Had “Saving Christmas” run any longer, Cameron would no doubt have found a way to find the divinity in Frosty, Rudolph, the Grinch, peppermint bark, the Elf on the Shelf, frosted cranberry hand soap and Mr. Hanky the Christmas Poo.

As a non-believer myself, I have no dog in Cameron’s hunt, and he is welcome to believe what he likes and interpret the popular symbolism of the season in any way he finds pleasing. But as someone who loves Christmas and Christmas movies, I’m irritated at how dull and didactic this film wound up being. I agree with his opening arguments about how hot chocolate, decorated trees, presents, family and eating are all awesome, but I also think that Christmas movies need to be more than a series of reactionary life lessons capped off by a thrown-together hip-hop dance number to a remix of “Angels We Have Heard on High.”

Director Doane offers no storytelling pizzazz; the lighting is careless, the pacing is deadly, the occasional stabs at comedy fall flat. Ultimately, “Saving Christmas” has nothing to share that Linus Van Pelt didn’t already say better on “A Charlie Brown Christmas.” And give me Vince Guaraldi’s holiday jams over Kirk Cameron bringing on the funk any day of the Advent calendar.