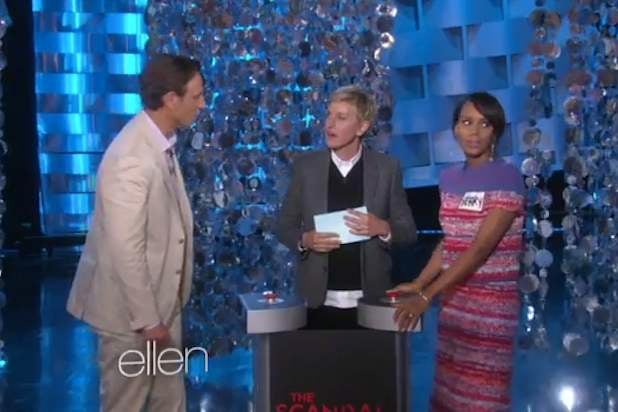 The cast of “Scandal” is not very good at uncovering it in real life.

Kerry Washington, Tony Goldwyn, Scott Foley, Guillermo Diaz, Darby Stanchfield, Joshua Malina, Katie Lowes, Jeff Perry and Bellamy Young all appeared on an episode of “The Ellen DeGeneres Show” set to air Thursday, in which they were separated into two teams — White House versus Olivia Pope and associates — to guess each others’ strangest secrets.

Also read: ‘The View’s’ Nicolle Wallace on Working for Sarah Palin: I Have Political Staffer Version of PTSD (Video)

Diaz, who plays Huck on the hit ABC drama, was the go-to answer for pretty much every question during the game (above), until it was revealed that he still sleeps with a stuffed animal every night.

In another “aww” moment during the broadcast, new “Scandal” cast member Portia de Rossi surprised her wife, DeGeneres, and joined in on the festivities.

“She is the perfect addition to our family. She really is,” Washington told DeGeneres. “She’s so pretty. We love her. She’s super fashionable. She has a really good wife.”

Watch the rest of the clips below: