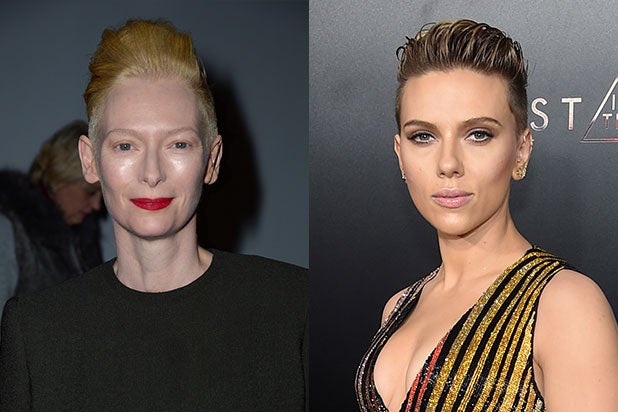 Tilda Swinton and Scarlett Johansson are getting some heat for voicing characters in a new film, for which a Japanese-themed poster was revealed on Tuesday.

It’s not clear what animated characters Swinton and Johansson are voicing in Wes Anderson’s upcoming stop-motion film, “Isle of Dogs,” yet Twitter is outraged that the actresses names are printed in English and Japanese kanji on the poster and are trolling them, once again.

Critics argue that this just adds fuel to the fire, given both of their recent movies were accused of whitewashing Asian roles.

Johansson received severe criticism for playing the cybernetic hero Motoko Kusanagi in the live-action remake of the classic anime, “Ghost in the Shell.”

Swinton was famously cast as “The Ancient One” opposite Benedict Cumberbatch in Marvel’s “Doctor Strange.” When the film’s trailer hit the web, some fans said casting Swinton was racist because the character was depicted in the comics as being Tibetan — and Swinton is a white British woman.

Set in Japan, “Isle of Dogs” follows a boy’s odyssey as he searches for his pet pooch. As of yet, it’s unclear who Swinton and Johansson even voice in the film. Of course, never mind that other cast members — such as Jeff Goldblum, Bryan Cranston and Edward Norton — also feature in the poster in Japanese writing, although the actors are not Asian.

Representatives for Fox Searchlight, Swinton and Johansson have not yet responded to TheWrap’s request for comment.

See some reaction tweets below:

@tsengputterman @ubeempress We get not ONE actress who's proven her skills at playing Asians, but TWO! Ain't we lucky! I feel so fucking blessed. pic.twitter.com/71Dmn4U3vF

I feel like Wes Anderson is kinda rubbing it in AsAm's faces by casting both ScarJo AND Tilda.

Jesus. Isle of Dogs has both Scarlett Johansson AND Tilda Swinton? pic.twitter.com/QHTu9AJ4o5