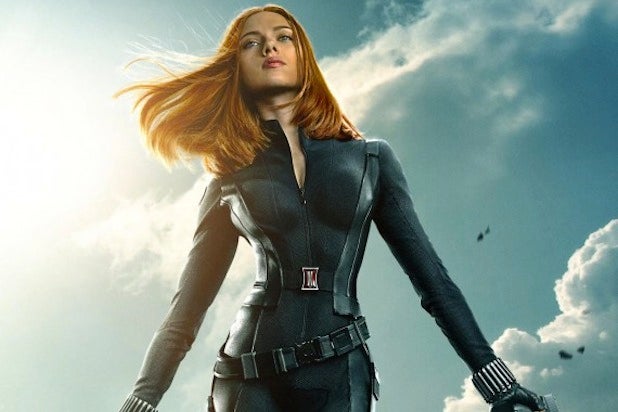 Scarlett Johansson‘s fans can buy her as a super-secret agent of S.H.I.E.L.D. in Marvel’s “Captain America 2: The Winter Soldier,” but they aren’t buying the tiny waistline she flaunts in a new poster for the upcoming film.

Backlash against the poster art, which features Johansson as The Black Widow with the body of a Barbie doll, began brewing online as soon as the image was released online Thursday, along with character posters of Samuel L. Jackson as  Nick Fury and Chris Evans as Steve Rogers.

“You know there is no helping the world when even Scarlett-Joh’s already little waist is shopped to an impossible width in the ‘Cap’ posters,” one woman tweeted, echoing the sentiments of many others.

Here’s a small sampling of the less-than-favorable reactions to the poster:

The issue of editing images of women to impossible standards of beauty has been particularly hot as of late.

Elle also received backlash earlier this month after releasing February’s “Women in Television” issue,  which featured a photo of “Mindy Project” star Mindy Kaling cropped to focus on her appearance above the chest. Three other female TV stars featured on separate magazine covers for the same issue were pictured from above the knee.

Just last week, singer Nicki Minaj took to Instagram to protest the photoshopped cover of ESPN Magazine that she posed for with NBA star Kobe Bryant. A petition asking ESPN to stop retouching photos of celebrities and models that appear in the magazine was launched, as a result, and has garnered 3,200 signatures to date.

Marvel has yet to respond to TheWrap‘s request for comment on the reaction to Johansson’s appearance on the new “Captain America” poster.

Take a look at a side-by-side comparison of Johansson on the poster and in real life to see if you agree with those bothered by the adjustments to her midsection.