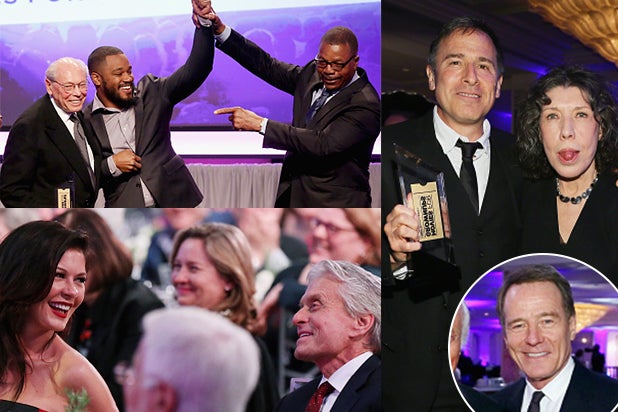 Monday night’s AARP awards revealed the one corner of Hollywood where the otherwise coveted 18-49 demographic need not apply.

Dubbed the “Movies for Grown Ups” awards, presenters and honorees at the anti-Kids’ Choice awards at the Beverly Wilshire uttered a common refrain: consumers over 50 want movies for grown-ups, made by grown-ups. 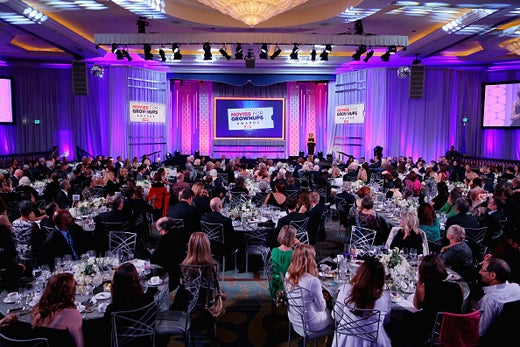 The Lily Tomlin vs. David O. Russell “I Heart Huckabees” Hatchet is Buried 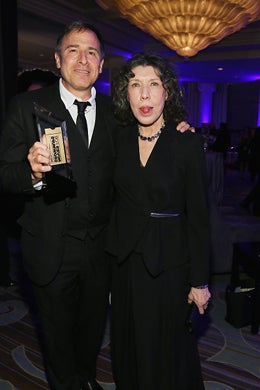 The two stars of one of the earliest viral videos hung out together backstage, before Russell had to bail out to his wife’s birthday party. 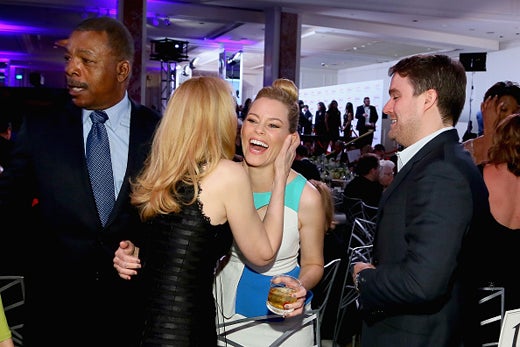 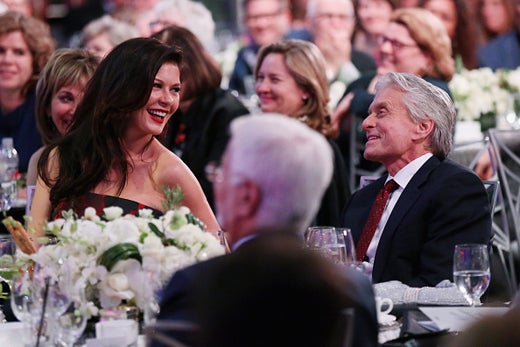 The star of “Fatal Attraction,” “Basic Instinct,” and “Disclosure” earned multiple references to his early 90’s work, dubbed a “sex trilogy” during his night as the lifetime achievement award winner. He got a standing ovation.

“The last time I got a standing ovation was when I beat cancer five years ago,” Douglas said. 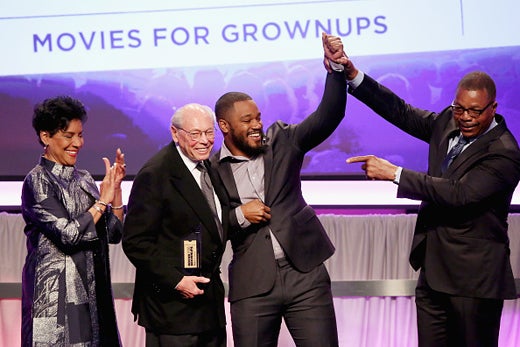 “Creed” director Ryan Coogler and Sylvester Stallone have gotten so tight that they are picking up each other’s bad habit of forgetting to thank each other at awards shows.

After Sly had to sheepishly return to the mic during a commercial break at the Golden Globes to shout Coogler and Michael B. Jordan their due, Coogler followed up his Sly-free speech on Monday night by returning to the mic to thank the “Rocky” originator.

“Unlike the Rocky in the film, (Sly’s) always on his phone. We text all the time,” he said. 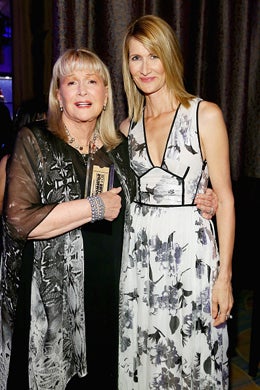 “Rooney Mara won best actress in Cannes. Why is she in my category?” – “Joy” winner Diane Ladd in accepting the Best Supporting Actress award. Ladd’s comments were directed at other awards shows, as Rooney Mara was not a nominee in either the best or supporting actress categories at the AARP awards. 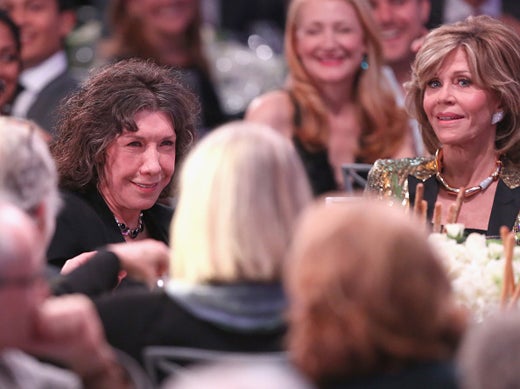 During some of host Kathy Griffin‘s extended crowd work amongst the celebs, Jane Fonda brushed Griffin along with a warning: “It’s almost 9.” 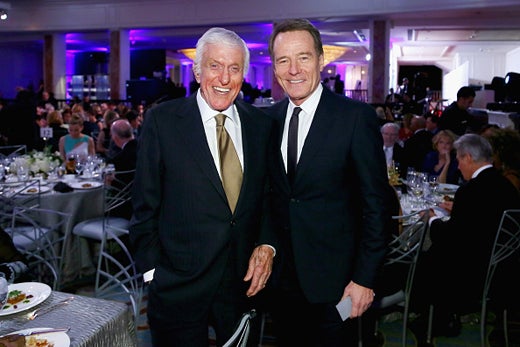 “I’m what’s left of Dick Van Dyke,” the 90-year-old veteran actor deadpanned. He admitted to  recently discovering binge viewing thanks to “Breaking Bad,” saying that watching it was like “eating peanuts. You couldn’t stop.”

“Spotlight”: Screening at the Vatican 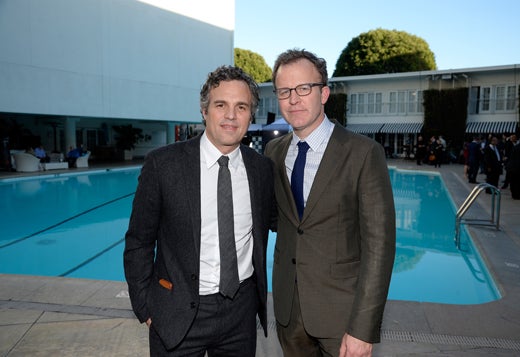 “Spotlight” co-writer and director Tom McCarthy announced that the Best Picture contender opened a three-day summit on sex abuse at a Vatican summit. “We all feel a privilege to be able to tell this story,” McCarthy said to close the night, accepting the AARP Best Picture award.

The “Spotlight” team is heading east as well. Almost all are heading to London for the Valentine’s Day BAFTAs this weekend. 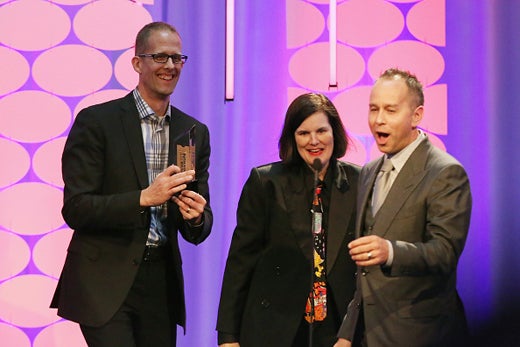 “Inside Out” director Pete Docter and producer Jonas Rivera picked up the “Best Movie for Grownups Who Refuse to Grow Up” award from Paula Poundstone. (Gabriel Olsen/Getty Images for AARP)

“When you give away lines,” she said to Douglas, “is it like ‘I’m not going to f—ing say this!?‘ I think Sherry Lansing put some spin on that”.

Category Creep Part 2: “The Martian” Meets The Last Man on the Moon 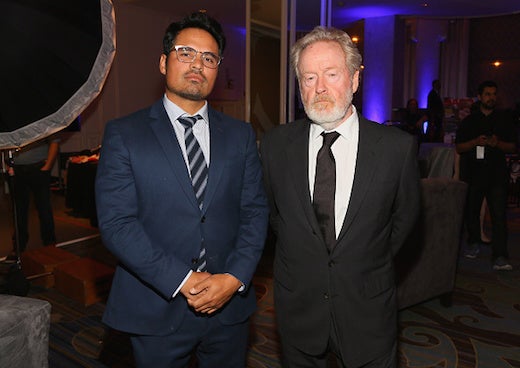 This is not the astronaut Ridley Scott met. It’s Michael Pena, who starred in “The Martian.” Contrary to this picture, smiling was allowed at the event.

Astronaut Gene Cernan, the last man to walk on the moon, got the first standing ovation of the night. Backstage, he met “The Martian” director Ridley Scott. “I just met a real astronaut and I think he approved of what we did. That makes me happy,” Scott said.

Adam Devine: In Search of a Fake ID 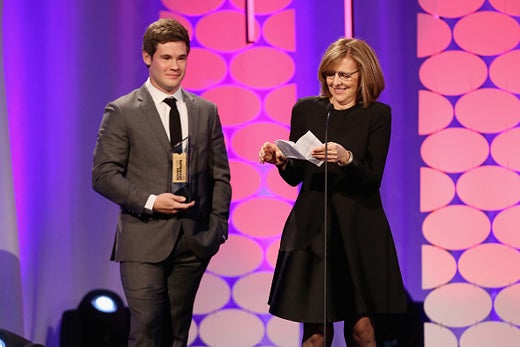 “In 18 years I’m excited to join your squad,” 32-year-old Adam Devine joked while presenting to “The Intern” producer-director-writer Nancy Meyers.

“It’s only in this room I can show how big the font is,” Meyers revealed of her printed acceptance speech.

Here is the full list of AARP “Movies for Grownups” Award Winners, broken down by their bolded Oscar status:

As the Denver Broncos and the Carolina Panthers prep for the big game, the hottest stars from entertainment and sports party-hop around San Francisco and the Bay Area

San Francisco welcomed stars, athletes and football fans with open arms -- and open bars -- in the days leading up to Super Bowl 50.