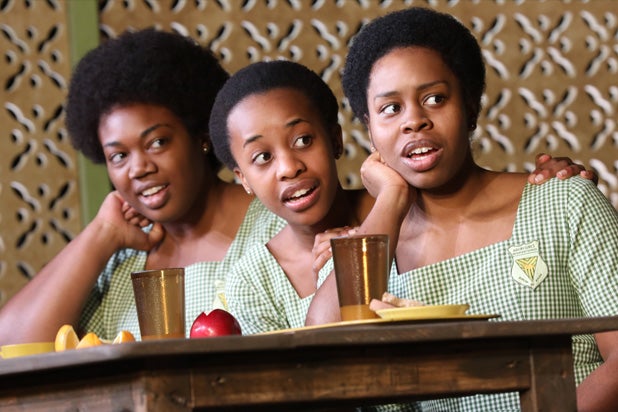 Is there anything new and funny to be said about beauty contests? Jocelyn Bioh takes on that challenge in her new and very first play, “School Girls; or, the African Mean Girls Play,” which opened Thursday at MCC’s Lucille Lortel Theatre.

It helps that Bioh sets that most superficial of competitions in a girls’ boarding school in the Aburi Mountains of central Ghana. That’s the first tantalizing twist. The second is that these teenage girls are so thoroughly Americanized, and they become more so as soon as the beautiful and light-skinned Ericka (Nabiyah Be), a girl from the States, arrives to challenge the beautiful and dark-skinned Paulina (MaameYaa Boafo) for domination over the other less physically imposing classmates.

These girls speak in balloon captions, and what they say is often funny, especially when it comes to digesting and garbling American pop culture. Having lifted Fey’s movie title, Bioh knows of what she writes.

Bioh’s portrait of Headmistress Francis is much more nuanced, and Myra Lucretia Taylor fully embodies the character’s many facets. Francis is part mom, dictator, sage, cop, and, above all, moral guardian, who finds herself torn between giving the students an education and knowing that a Miss Ghana winner from her school could go a long ways toward paying for that education.

Taylor’s Francis grounds the comedy, and her scenes with a returning alumna, Eloise (Zainab Jah), crackle with unspoken but deep rivalry. Eloise won the Miss Ghana contest two decades ago, and it’s clear that back then she was the mean girl and Francis was the overweight outcast. Jah’s elegant assurance makes her Eloise a formidable foe who, unlike Francis, chose self over everybody else. Note to Taichman: When Eloise dusts the cafeteria bench before sitting down, it’s funny — the third and fourth times, not so much.

What disrupts the comedy, besides all that dusting, is Boafo’s Paulina, and it’s not entirely the fault of the actor’s cudgel approach to playing the popular bad girl. Long before Fey’s movie about the high school A-List, Clare Boothe Luce wrote the original mean-girls play, “The Women,” and wisely gave her nastiest character Sylvia (Rosalind Russell in the 1939 movie classic) most of the best lines. We may hate the cutthroat character, but Sylvia galvanizes our attention because we can’t wait to hear her next attack.

Paulina isn’t so lucky. The character is given barbs that are simply cringe-worthy. A typical retort: “Do you hear me? Or do you have food stuffed in your ears too, you f—ing cow?” Later, she calls the same classmate “a fat-a– daughter.”

Fey and Boothe Luce let their zingers deliver the message. Comedy can be serious business, but Bioh doesn’t trust her own humor. Late in “School Girls,” she gives us the Big Reveal Scene in which Paulina and Ericka expose deep childhood wounds to present themselves as reverse-image victims. Yes, underneath every mean girl is a lost girl.

“School Girls” runs under 75 minutes. When did plays become skits with a moral stuck on at the end?