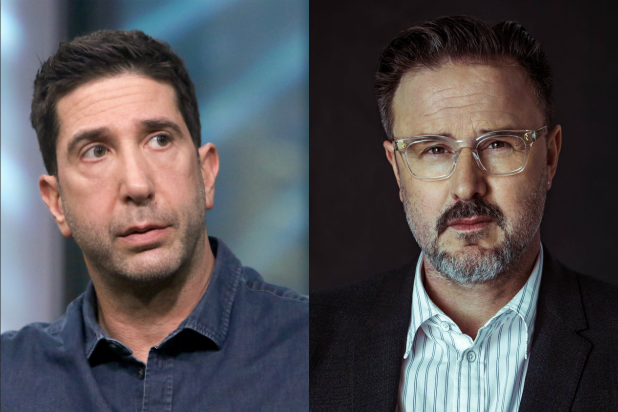 David Schwimmer, David Arquette, along with several leading Hollywood actors and producers have teamed up to back the #MeToo and #TimesUp movements with #AskMoreOfHim, calling for support of sexual misconduct survivors.

“For the last four years, The Representation Project has used #AskHerMore on the red carpet to spotlight how our culture values women’s appearance over their accomplishments,” the initiative says on its site. “This year we’re using #AskMoreOfHim to invite men to not only join the conversation but to become allies in the movement for equality. We’re asking men to stand for women’s rights and end sexual harassment and violence against women.”

The organization lists 10 ways men can help combat sexual harassment, including approaching it as a men’s issue as well, and not remaining silent when they see transgressions. #AskMoreOfHim aims to make men, both in the entertainment business and outside of it, more accountable for their treatment of women.

Also Read: Facebook's Sheryl Sandberg on #MeToo: 'Not Harassing Us Is Important, but Basic'

The Group issued an open letter on Friday, arguing that men have a “special responsibility to prevent abuse”:

We applaud the courage and pledge our support to the courageous women – men, and gender non-conforming individuals – who have come forward to recount their experiences of harassment, abuse, and violence at the hands of men in our country. It is never easy for someone who’s been harassed or bullied to speak up, especially when the abuse is sexual. These people are our colleagues and friends. They are fellow artists and craftspeople. They are also our partners, siblings, parents, and children. We are in awe of their strength and commitment to speaking truth to power.

But our awe is not enough. As men, we have a special responsibility to prevent abuse from happening in the first place. After all, the vast majority of sexual harassment, abuse, and violence is perpetrated by men, whether in Hollywood or not. And in entertainment – like many industries – men continue to hold most of the decision-making power. Therefore, one of the most powerful things that men can and must do is make it clear to other men – including their friends, colleagues, and co-workers – that sexual harassment and abuse are never acceptable. This goes for everything from sexist and degrading comments, right up to domestic violence and sexual assault.

Some may question our motives for signing this statement and we aim to counteract their skepticism by being painfully honest. Men are imperfect. We are imperfect. And many men, including perhaps some of us, may have enabled the bad behavior of others or acted in ways we now regret. Nonetheless, we believe that men must speak out against sexism, even as we engage in our own process of critical self-reflection, personal growth, and accountability.

So consider this our pledge to support survivors, condemn sexism wherever we see it, and hold ourselves and others accountable. As advocates, actors, writers, producers, and directors, we hope that our actions will inspire other men to join us. Until now, only a small number of them have been actively engaged in this effort. This must change. It’s time we #AskMoreOfHim.

Actress Jessica Chastain was among the first to lend her support for the new campaign:

I am so moved by this letter. Thank you. I hold hope that as this letter circulates, more of my male colleagues will sign and support the hashtag #askmoreofhim
We all benefit from a healthy work environment, free from abuse. https://t.co/2RcZlRbuds

The letter was released ahead of this weekend’s Academy Awards. The Representation Project asked its supporters to use the hashtag #AskMoreOfHim during the ceremony.

“A revolution is taking place”

"I am wearing black to thank and honor all the brave whistleblowers who came forward and shared their stories of harassment and discrimination," Messing said on Sunday's Golden Globes red carpet. She added that she's "shocked to to hear E! doesn’t believe in paying their female hosts the same as their  male hosts," referring to Catt Sadler's exit from the network after learning she wasn't paid as much as her male counterpart, Jason Kennedy. "Women are just as important as men," she said.