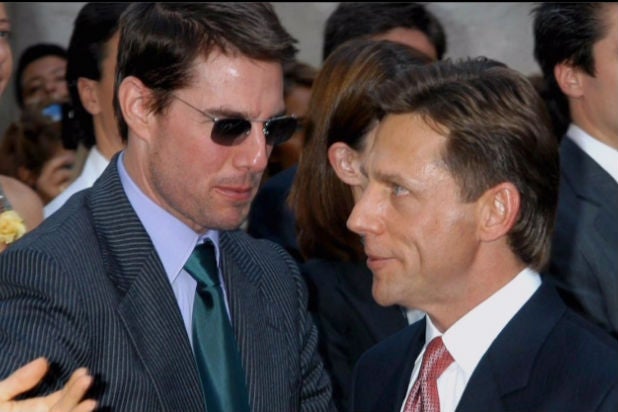 In the wake of Scientology leader David Miscavige’s father signing a book deal with St. Martin’s Press on Wednesday, the embattled church is hitting back against claims of surveillance, intimidation and callous indifference at the center of the forthcoming tell-all.

Ronald Miscavige Sr. is penning a memoir tentatively titled “If He Dies, He Dies,” which refers to a 2013 incident in which the senior Miscavige was on the verge of a heart attack outside his Florida home when he encountered private investigators allegedly hired by his son. According to one of the investigators in a Los Angeles Time expose published in April, David Miscavige instructed the PIs not to intervene, telling them: “If it was Ron’s time to die, to let him die.”

A Scientology spokesperson told TheWrap that the alleged incident is “provable bullshit,” calling the quote “despicably false” and adamantly denying that Miscavige hired any investigators to follow his estranged father.

“No such conversation with Mr. Miscavige ever took place and any claim that one did is provable bullshit,” the rep said.

In April, the L.A. Times reported the claims of Dwayne S. Powell, a private eye arrested in Florida in 2013 while lurking in residential area not far from the town where Ronald Miscavige lived. Powell alleged that he and a partner were tasked with searching Ronald Miscavige’s garbage, photographing him constantly and tracking him with a GPS device. He was charged with a federal count of possessing an illegal gun silencer, which was later dismissed.

The church had no comment about Ronald Miscavige’s deal for a book, which does not yet have a release date. St. Martin’s previously published Andrew Morton’s 2008 unauthorized biography of Tom Cruise.

The Scientology rep disputes the notion that its leader harbors any ill will toward his father. “Mr. Miscavige has always taken care of his father and continues to do so,” the rep said. “Beyond that, as a matter of policy, neither the Church nor Mr. Miscavige comments on members of his family.”

It’s been a rough year for the faith founded by L. Ron Hubbard, given the controversy stirred up by the March premiere of HBO’s “Going Clear: Scientology and the Prison of Belief.”  Directed by Alex Gibney, the documentary spotlighted startling claims of imprisonment and slave labor for followers, as well as allegations that the church leaders exerted control over celebrity members such as Tom Cruise and John Travolta.

TheWrap exclusively reported that former Scientologists who appeared in the film were allegedly visited with threats of physical harm and financial ruin.

“Most of the real vitriol is for the people who were in the film,” Gibney said. “They’ve received threats of physical harm, threats of having their homes taken away, threats of being forced into bankruptcy. They’re being followed by private eyes and surveilled.”

Prominent ex-Scientologists including Marty Rathbun, publicist Sylvia “Spanky” Taylor, Tom De Voct and director were all interviewed for the documentary.

The church vehemently denied the allegations, saying, “Each and every one of the allegations in your questions is absolutely false and rejected. Alex Gibney is getting desperate and is now resorting to ludicrous, made-up claims.”