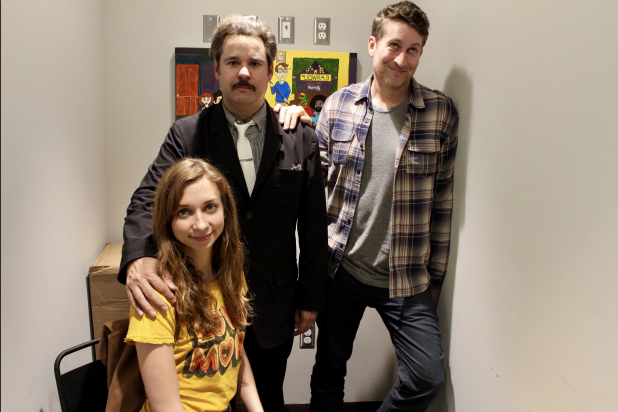 Scott Aukerman, Lauren Lapkus and Paul F. Tompkins are masters of comedy podcasting, with at least a dozen shows between them, from “Comedy Bang Bang” to “With Special Guest Lauren Lapkus” to “Spontaneanation.” Their newest podcast, “Threedom,” unites the three friends in a deceivingly loose format: They get together for casual conversations that suddenly veer into sharp bits of improv.

You think you’re smiling at a pleasant conversation, and then catch yourself cry-laughing at what a ridiculous spot they’ve slid into.

In their first episode, for example, the three try to pull off the conversational exit strategy of laughing and then saying you have to go. It should be so easy, but it isn’t.

Because the show is called “Threedom,” and because there are three of them, we decided to ask Aukerman, Lapkus and Tompkins the same three questions. Their answers were too good for one story, so we’re running three. There will be two more after this one, soon.

Has podcasting been good for comedy?

Lauren Lapkus: It’s been so great for comedy because it allows people to get their material and their voices heard. It’s hard to become known as an improviser, because people only see you at their local theater, and if you don’t live in LA or New York, you just don’t know about these improv comedians that are performing every night of the week.

It’s so amazing to me to be able to share what I do and what my friends do with the general public. They can live anywhere. … Now my mom has somehow figured out how to listen to my podcasts, so that’s changed the whole game.

Paul F. Tompkins: Absolutely. It’s a boon to comedy for sure, because it has enabled people to grow their audiences, find their audiences. People share them with other people, they tell them about the podcasts they’re listening to, there’s online communities.

Since the beginning of podcasting, as it grew it was so much easier for me to sell tickets to shows. To find out there was already an audience waiting for me in a place I’d never been before was tremendous. Because in the days of clubs, pretty much you’d have to go to the place again and again in order to establish an audience in that town. You could do it with albums and stuff, but being in people’s ears on a regular basis, they build a relationsip with you.

It’s also led people to work together that maybe otherwise wouldn’t work together. Things like “Threedom” that are very loose, but certainly more structured things like my working with SuperEgo. I’d never met those guys before podcasting and I don’t know if I ever would have. That’s been a huge part of my life and certainly has meant a lot to other people, they’ve told us.

Scott Aukerman: It’s good for my comedy in the sense of I feel like I’ve gotten better at comedy since I started it. Is it good for comedy as a whole? I think it’s been not only the most significant development for comedy since the invention of the album, but also it’s so popular that it can lead to laziness in the sense of, “Why work on an act? Just do a podcast.” And people slave over an hour of comedy or even the half-hour TV show that I had — I would put so much work into it and then at the end of the day people like the podcast more.

It can get to be depressing, like, “Why bother?”

This is a far more depressing and intricate answer than I think you expected. I think it’s simultaneously good and bad.

You can find “Threedom” on Stitcher.