Derrickson and frequent collaborator C. Robert Cargill adapted the script based on Joe Hill’s short story. Ethan Hawke, Mason Thames (“For All Mankind”) and Madeleine McGraw (“Toy Story 4,” “Secrets of Sulphur Springs”) are set to star in the film.

According to the studio, the film is about Finney Shaw, a shy but clever 13-year-old boy who is abducted by a sadistic killer and trapped in a soundproof basement where screaming is of little use. When a disconnected phone on the wall begins to ring, Finney discovers that he can hear the voices of the killer’s previous victims. And they are dead set on making sure that what happened to them doesn’t happen to Finney. 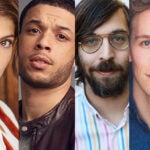 The film is produced by Derrickson & Cargill’s Crooked Highway and presented by Universal and Blumhouse. Jason Blum, Derrickson and Cargill are producers on the film, which is executive produced by Hill, Christopher H. Warner and Ryan Turek.

Derrickson’s credits include “Doctor Strange,” “Sinister” and “Devil’s Knot,” and he is currently serving as executive producer on “Doctor Strange in the Multiverse of Madness,” directed by Sam Raimi. He will also next direct “When Gravity Falls” and “Two Eyes Staring.”