An anime adaptation of “Scott Pilgrim” is in the works at Netflix.

Netflix has partnered with UCP, which produces the streaming giant’s “The Umbrella Academy,” to develop the project, which does not have a series order, an individual with knowledge of the project told TheWrap. It is based on the popular series of graphic novels. 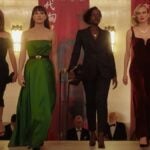 Bryan Lee O’Malley, “Pilgrim’s” artist and creator, is writing and executive producing the adaptation with Ben David Grabinski, the showrunner of Nickelodeon’s revival of “Are You Afraid of the Dark?” The animation would be done by anime house Science SARU.