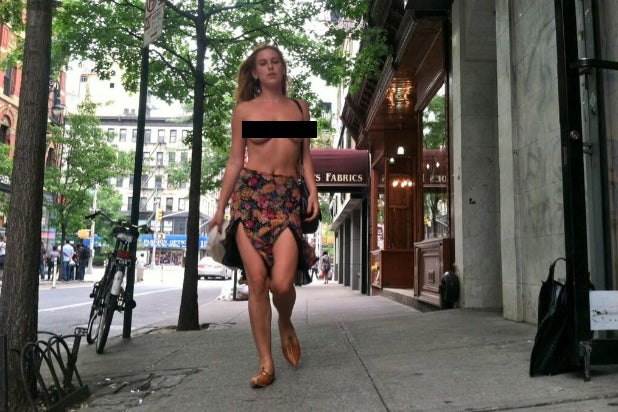 Scout Willis defended herself Monday against a whirlwind of negative press following her topless protest of Instagram’s censoring policy, by claiming in an article that her privileged position gives her an opportunity to talk about feminist issues.

“I understand that people don’t want to take me seriously. Or would rather just write me off as an attention-seeking, over-privileged, ignorant, white girl,” the daughter of Bruce Willis and Demi Moore wrote on XOJane.

Willis protested a decision by Instagram to close her account last week — after she posted a photo of herself in a sheer top and another photo of a jacket she made featuring a picture of two topless women.  She responded by documenting herself strolling topless through Brooklyn in photos posted to Twitter over the weekend. The topless trip was legal, and the photos were acceptable by Twitter’s standards.

“I am white and I was born to a high profile and financially privileged family. I didn’t choose my public life, but it did give me this platform. A platform that helps make body politics newsworthy.”

In her explanation of the protest, she argued that women’s nipples are not a sexual object, especially when depicted in photos of women breastfeeding and breast cancer survivors. She also claimed Instagram is contributing to body shaming by banning these photos from Instagram, Willis says, while allowing deliberately sexualized pictures of bikini models showing everything but the nipple.

“What I am arguing for is a woman’s right to choose how she represents her body — and to make that choice based on personal desire and not a fear of how people will react to her or how society will judge her. No woman should be made to feel ashamed of her body,” Willis wrote.

Instagram, which said the nipple photos violated its community guidelines, agreed to reopen Willis’ account — without the offending photos. The 22-year-old said she did not want it back.