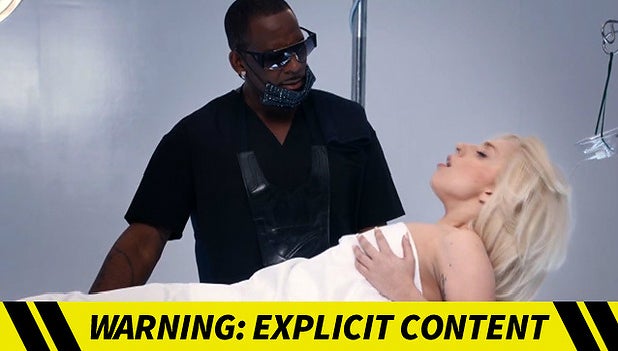 Lady Gaga delayed and then ultimately scrapped altogether the official music video for her latest single “Do What U Want,” but nothing stays buried for long in the age of the internet. TMZ has obtained 30 seconds of the controversial video, which is sexually explicit enough, but has still been overshadowed by the personal antics of the people involved.

Controversial photographer Terry Richardson, who has been mired in allegations of sexual assault against models he photographs, directed the video and also appears in it, while R. Kelly, with his own history of sexual misconduct controversies, co-stars.

See also: Lady Gaga Blames ‘ARTPOP’ Flop on ‘Those Who Have Betrayed Me,’ Begs Fans’ Forgiveness

Gaga lies on a hospital bed as her doctor (R. Kelly) administers some very satisfactory medicine before a party proceeds to break out over her unconscious body. In other segments, Gaga is seen wrapped in newspaper and writhes about as Richardson takes photographs of her.

Gaga previously blamed the delayed release of the music video’s release on “those who have betrayed me,” though the timing of the statement with new allegations against both Richardson and R. Kelly did not go unnoticed by most fans.