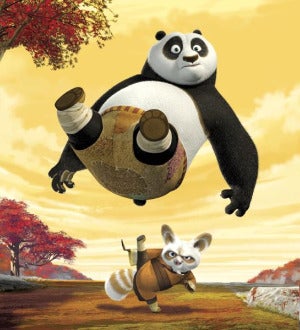 In his Los Angeles Superior Court complaint, Terence Dunn is described as an “Ivy League-educated Chinese-American writer-producer-teacher-philosopher,” who pitched DreamWorks the idea about a kung fu-aspiring panda bear and his tiger, leopard, snake, crane, monkey and tortoise friends back in 2001.

All of those characters would eventually wind up in "Kung Fu Panda," which voice-starred Jack Black and went on to gross $631.7 million globally after it was released in June 2008. A sequel is slated for June 2011.

However, Dunn – whose suit also claims he was a tai chi consultant for the Los Angeles Lakers in 2001 – said he was told in February 2002 that DreamWorks had rejected his concept.