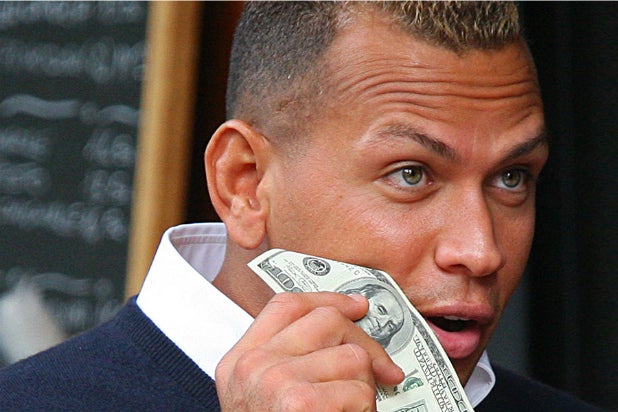 The Florida Man Birthday Challenge on social media has made Sunshine State criminal weirdness into a badge of honor for us all: Google your birth date and “Florida Man” and you might get the headline “Florida man wasn’t drinking while driving, just at stop signs” or “Florida man who had sex with dolphin says it seduced him.”

I bring this up to note that if “Cocaine Cowboys” filmmaker Billy Corben — that Miami-based celebrator of all that’s criminally excessive about his state — doesn’t squeeze a jokey documentary series out of it soon, I’d be shocked.

Until then, we have “Screwball,” Corben’s adrenalized rehash of one of the more nationally rippling “Florida man” stories in recent memory, the Biogenesis steroid scandal that in 2013 exposed widespread doping in Major League Baseball. It’s a story that grew out of a petty cash dispute between underground “anti-aging” specialist Anthony “Tony” Bosch — a Miami clinician whose clients included star sluggers Manny Ramirez and the New York Yankees’ Alex Rodriguez — and a hanger-on at Bosch’s clinic named Porter Fischer.

Since the late 1990s, when juiced hitters reignited baseball’s popularity by turning it into a home-run contest, Bosch had made his name in hushed circles as a human growth hormone dealer for ballplayers by selling a micro-dosing regimen that would evade detection under MLB’s banned-substance testing rules. But he also dealt testosterone to walk-ins, too, which is how Bosch and his shady tanning-salon business partners, a pair known as the Carbone brothers, crossed paths with Fischer.

And Fischer — a South Florida local who wanted Sylvester Stallone’s body — was naïve enough not to realize that Bosch, whose medical degree from South America barred him from practicing in America, wasn’t legit as either a doctor or a businessman. (Bosch, an engaging interviewee, bristles at coverage calling him a “fake doctor,” when the term he’d prefer is “unlicensed physician.”)

With so much flavor in its details, it would be a crime if anyone couldn’t turn this saga — populated by the tanned and tarnished, the crooked and cock-eyed — into a Coens-meet-Hiassen-style romp, even for the sports-phobic. And Corben takes to the material like somebody electrified by its possibilities to stir outrage in baseball traditionalists, fascination in the criminality-obsessed and laughter in those easily amused by South Florida’s more colorful characters.

Which is why Corben’s central aesthetic conceit is such a rudely enjoyable one: casting children to play all the major figures in the scandal, outfitted in hilarious facial hair and costumes, and lip-syncing conversations and interactions as remembered by Bosch, Fischer, or anybody else. (Miami New Times reporter Tim Elfrink, who originally broke the story, and Florida health investigator Jerome Hill, who ran afoul of MLB’s brand-protecting investigative arm, are the other key on-camera chroniclers.)

The effect is not unlike the surrealist tinge of Comedy Central’s “Drunk History,” and as in that show’s sincerely rendered historical dramatizations, the re-creations are spiritedly acted by Corben’s pint-size company, which include Bryan Blanco (as Bosch), Frankie Diaz (as Porter) and Blake McCall (as Rodriguez).

Between the cosplaying kids and Bosch’s lively storytelling skills, “Screwball” is absorbing stuff, even if Corben doesn’t always know when to restrain his own addiction to performance enhancements. It’s easy to grasp how close a lot of this rogue’s-gallery material is to Scorsese territory without a slo-mo montage scored to a knockoff of the “Goodfellas”-iconic piano riff from “Layla.” (And this after he’s already given us a clip from said film.)

Also Read: Russian Bronze Medalist in Curling Tests Positive for Doping -- and Even Curlers Are Stumped

Corben can be obvious in his need to be irreverent, but it’s safe to say the inside story he’s making into an outside humdinger warrants an approach that doesn’t have to be respectful, neither to so easily disgraced a major sport, nor to a state with a problematic attraction to hustlers and scammers. (Corben revels in using clips like one from “30 Rock” that refers to Florida as “America’s Penis,” and when acknowledging governor-turned-senator Rick Scott’s own history with Medicare chicanery, using that maniacal photo that makes Scott look like a cackling skull.)

“Screwball” briefly flirts with umbrage at what was lost when — gasp! — we learned that some of our athletic heroes didn’t come by their comically outsize bodies or swinging acumen naturally. But really, Corben’s account is a prideful slab of snark, about Florida, its usual suspects, and the glittering allure of fraud, which one interviewee states is “the unofficial state business.”