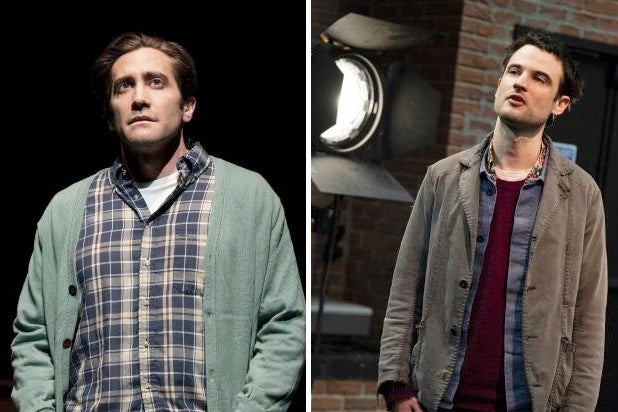 Nick Payne and Simon Stephens do their respective one-act monologues no favors by putting them together on a double bill. Even the starry solo turns of Jake Gyllenhaal and Tom Sturridge can’t relieve the monotony of seeing Stephens’ “Sea Wall” and Payne’s “A Life” back to back with an intermission. The revival of these two plays opened Thursday at the Hudson Theatre after a recent engagement at the Public Theater.

Very distant are the days when playwrights, like Edward Albee, routinely paired substantial one-act plays, like “The American Dream” and “The Zoo Story.” Nowadays, audiences are content to see a 70- or even 60-minute play and call it a night at the theater. More important, Albee offered something that’s sadly lacking with the Stephens/Payne coupling: variety.

Since “Sea Wall” had its debut in 2008 and “A Life” (formerly burdened with the title “The Art of Dying”) followed six years later, Stephens can be said to have gotten there first to write a monologue about death in which the man’s grief is so overwhelming that he can’t cogently tell us the story of what happened.

Yes, in his monologue, Alex (Sturridge) always returns to the death that has wounded him, but he mixes it up with what, at first hearing, seem to be unrelated topics. He tells us how best to photograph people and that Jane Austen didn’t write detective fiction, as if anyone were asking. He recalls going scuba diving and encountering a great underwater sea wall.

In an amazing feat of literalism, Sturridge climbs a ladder to teeter precariously on an upstage wall (set design by Laura Jellinek). There’s also talk of pi, or the Archimedes’ constant. In his plays, Stephens is big on math references, which never fail to impress theater critics who majored in the liberal arts.

The math references, as well as other digressions, have to do with God. They are the kind of ramblings you heard from that annoying college freshman in your dorm who recently returned from a Lars von Trier film festival.

Alex’s non sequiturs are meant to show his discombobulated state of mind, but soon devolve into a playwright’s tic. “Sea Wall” is not helped by Sturridge’s jerky performance. Every fifth or sixth word is punched, as if English is Alex’s second language, and Sturridge never stops attacking the air around him, as if shadow-boxing with his right hand. He appears most excited when correctly pronouncing a French location — the play is replete with such place names since the death in question takes place in the south of France.

Carrie Cracknell directs “Sea Wall” with a minimum of fuss. She makes up for that minimalism by pulling out every directorial cliché to stage “A Life.”

A stagehand enters the dimly lit stage only to miraculously morph into Jake Gyllenhaal! Cracknell and designer Guy Hoare immediately place him under a spotlight for the duration of the play. He’s the movie star, all right, and designers Kaye Voyce and Christopher Peterson attempt to remedy his good looks by putting Gyllenhaal in baggy pants and a lumpy cardigan sweater that almost but not quite covers his flannel shirt. Directors used to do this kind of deglamorization with Julia Roberts in her post-“Pretty Woman” film career, as if to prove she could really act.

A far greater problem than the costume is that spotlight. This effect might work for anyone sitting in the front of the orchestra, but it’s a trial for everybody else — just as it was at the far more intimate Newman Theater at the Public.

And the lighting only gets worse. About halfway through “A Life,” Gyllenhaal leaves the stage to walk around and through the audience, illuminated by his iPhone. You will pay no more attention to what he’s saying during this excursion than you did when Bryan Cranston held court in the audience in the recently shuttered “Network.”

Payne is better at the non sequiturs than Stephens. Then again, the design here is more obvious: Abe (Gyllenhaal) scrambles stories about the death of his father and the birth of his daughter. Unlike Sturridge, Gyllenhaal segues seamlessly, and sometimes he’s talking about Dad before we realize he’s finished with the wife and baby. It’s an effectively sentimental play, and Payne isn’t above throwing in John Lennon’s “Imagine” to give the heartstrings a good workout. It’s also a deeply naive play. Only a playwright under the age of 40 would tell us that we plan for birth but we don’t plan for death.

Not that I’ve kept count over the years, but I don’t recall ever seeing a play in which “ER” is mentioned. Until now. Stephens and Payne’s respective characters each mention the TV show that not only made George Clooney a star but had so much to say about these playwrights’ favorite subjects: life and death.