Paramount+ and CBS made it official on Tuesday: “Seal Team” and “Evil” will move from the broadcast network to streaming service Paramount+ next season.

“Seal Team” will will premiere its fifth season first on CBS in the fall before its move, while “Evil” will debut its long-awaited second season fully on Paramount+.

“Clarice,” which was also said to be shifting over to Paramount+, is still in negotiations to complete that move, an individual with knowledge of the talks told TheWrap. 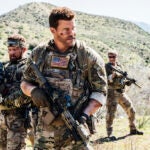 Also Read:
‘SEAL Team’ and ‘Clarice’ to Move From CBS to Paramount+

ViacomCBS is set to present CBS’ upcoming fall schedule to advertisers on Wednesday.

“Seal Team” is a military drama that follows the professional and personal lives of the most elite unit of Navy SEALs as they train, plan and execute the most dangerous, high-stakes missions. It stars David Boreanaz as Jason Hayes, the leader of the Tier One team. Max Thieriot, Neil Brown Jr., AJ Buckley and Toni Trucks also star.

“Evil” stars Mike Colter and Katja Herbers. It centers on skeptical but open-minded psychologist Kristen Bouchard (Herbers), who meets and begins working with priest-in-training David Acosta (Colter) and a blue-collar contractor (Aasif Mandvi) to determine whether a man on trial for a string of grisly murders was driven by demonic possession.

“Evil” also stars Michael Emerson as Leland Townsend, an expert witness to the defense with something sinister up his sleeve.

“Our Studio and Network have a strong track record of developing high-quality dramas that have multiplatform success, and these series speak to that strength,” said George Cheeks, president and CEO of the CBS Entertainment Group. “These moves mark another example of how our linear and streaming ecosystem can strategically work together to maximize value for the content and benefit the series and its creators.”

“We are thrilled to bring new seasons of these phenomenal series to Paramount+,” Paramount+ executive vice president and head of programming Julie McNamara said. “We have a strong record of building incredible audiences with these creative teams, including Robert and Michelle King’s incomparable ‘The Good Fight, ‘and look forward to bringing our subscribers even more seasons of series they love.”