Conservative Fox News personality Sean Hannity threw his support behind a surprising ally in the fight for more legislation to serve American veterans. He agreed with Jon Stewart.

On Wednesday, Stewart — a former evening opinion host himself, though on the other end of the political spectrum — linked up with members of the House Veterans Affairs Committee to show his support for legislation helping vets who’ve had toxic “burn pit” exposure.

Hannity shared an article about Stewart’s participation on Twitter, writing, “Don’t often agree with Jon Stewart. He’s right on this. It’s total bullsh–. Help our vets. Republicans need to own this.” 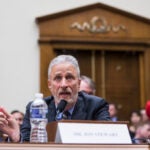 This initiative isn’t surprising from either party.

Stewart has been going after the Veterans Administration for years, demanding better care for armed service members. In April, Stewart helped announce the legislation to aid military veterans who were poisoned by the dangerous toxic fires, or “burn pits.” A documentary is now in the works about the effects of those exposed to the fumes.

Hannity, too, has a history of advocating for vets, as does his employer. As part of its “Proud American” franchise-branded Memorial Day programming initiative, Fox News is featuring stories of active members of the US military and veterans this weekend. The company is also donating $25,000 to The Navy Seal Foundation and $15,000 to the USO effort to bring meals to service members supporting COVID-19 vaccine missions. Earlier this month, Fox Nation announced veterans and active service members are entitled to a free year of the on-demand streaming service.