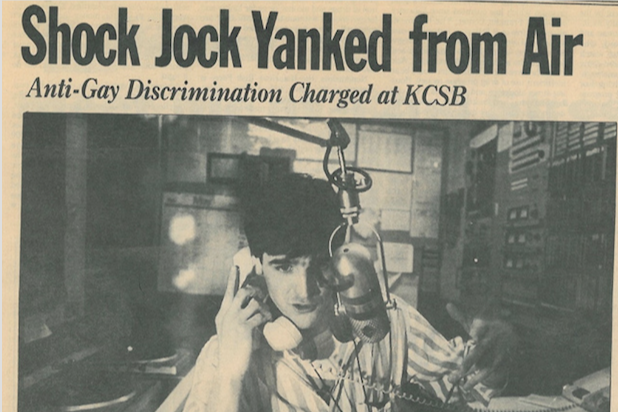 Fox News host Sean Hannity’s career began the last place you might expect: on the liberal campus of UC Santa Barbara, where he hosted a shock-jock radio show in which he tore into the news media and offered up flatly wrong theories about AIDS.

It was 1989. Hannity was a 27-year-old college dropout from Long Island when he scored a job at UCSB’s radio station. But, as the Washington Post reported, he was soon fired for offenses that included egging on a guest “who claimed that AIDS was spreading among gay men because they consumed each other’s feces,” and telling a lesbian mother he felt sorry for her child. The details — and what he did next — are the subject of our new “Shoot This Now” podcast, which you can listen on Apple or Spotify or here:

After enlisting the American Civil Liberties Union in his fight to return to the college airwaves, Hannity went on to a job in Alabama. The Post reports that Hannity’s official station biography said he “made a proud name for himself by insulting lesbians.”

He would later, of course, go on to criticize the ACLU for what he saw as its liberal bias. But he has expressed regret over the college radio-show comments.

“Almost 30 years ago when I was starting out in radio in my 20s, I interviewed a controversial guest who made several incendiary comments. I was young and stupid with no clue how to do a show. I’m actually very libertarian on social issues and people’s personal lives. I’m now 56 years old and yes, I freely admit the comments in my 20s were ignorant and embarrassing,” Hannity said in a statement.

Hannity’s past homophobic comments are notable today because of the host’s recent feud with Jimmy Kimmel, in which Kimmel insinuated that Hannity was sexually submissive to President Trump. Kimmel apologized, saying: “By lampooning Sean Hannity’s deference to the president, I most certainly did not intend to belittle or upset members of the gay community and to those who took offense, I apologize.”

Every week on “Shoot This Now,” Matt Donnelly and I discuss a different story we think should be made into a TV show or movie — then offer up our dream cast and creative team. I have an interesting idea for who should play a young Sean Hannity. Matt has a better one.

During our discussion of Hannity and the ACLU, we also talk about “The Simpsons” recent handling of Apu, Matt tells a great story about Gwyneth Paltrow, and we tell two random stories about “Happy Endings” star Adam Pally.  If you like the episode, check out our archives, and rate us on iTunes.

Oh, and be sure to check out our still very timely episode from last week about what Facebook CEO Mark Zuckerberg can learn from Johnson and Johnson’s handling of the 1982 Tylenol murders.