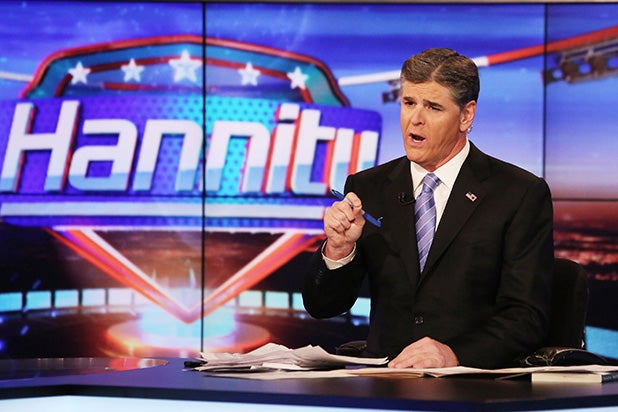 Sean Hannity returned to his Fox News program on Tuesday night despite speculation that the host’s extended Memorial Day vacation would mark the end of his tenure at the network.

Once again, Hannity opened his show by discussing the conspiracy theory surrounding the murder of Seth Rich. “I think the country deserves the truth,” he said. “I can report that I am making progress. We will have a lot more sooner rather than later.”

The host then pivoted to address the media coverage of the multiple investigations into the Donald Trump administration’s ties to the Russian government. “The funny thing is I’ve been called a conspiracy theorist because I dared to ask questions,” he said, arguing that his coverage of the Rich murder is more well-founded than coverage of the Russia scandal.

“I can’t ask a question without being called a liar, a conspiracy theorist … I’m being slandered,” he said. “And the worst part is there are many on the left working to get me fired, get me off the air.”

“What has been happening to me in the last week is a kill-shot,” he continued.

Hannity went on to accuse rival cable news networks and other media outlets of publishing “fake news.” He singled out MSNBC’s Rachel Maddow, accusing her of “floating the most bizarre, frankly, conspiracy theories that I’ve ever heard.” He then pulled up some of Maddow’s past coverage Trump administration and criticism of the president.

“In the past, conservatives have never fought back” against critics, Hannity said.

Hannity’s first guests were conservative commentators Brian Maloney and Melanie Morgan, who have organized an online campaign, calling on advertisers to pull their promotions from Maddow’s show. The campaign came in response to a similar one by Media Matters for America, which has called on companies to remove their advertising from “Hannity.”

Hannity’s return is in keeping with the plan announced by the network last week. The host has been off the air since Wednesday, only to return to his chair on Tuesday’s show.

“Like the rest of the country, Sean Hannity is taking a vacation for Memorial Day weekend and will be back on Tuesday. Those who suggest otherwise are going to look foolish,” a Fox News spokesperson said at the time.

Hannity’s vacation came shortly after he lost several advertisers after pushing a retracted theory surrounding the death of former Democratic National Committee staffer Rich. When it was announced he would take a vacation extend his Memorial Day weekend, many were quick to ponder if he would be fired while away, which would coincide with how the network handled the firing of Bill O’Reilly.

Last month, O’Reilly was fired from Fox News amid a series of sexual harassment allegations while he was on vacation in Italy. The former “O’Reilly Factor” host was under pressure as advertisers backed away from his program because of the accusations made against him.

By contrast, at least one of Hannity’s lost advertisers, the financial services company USAA, has since resumed advertising on “Hannity,” according to the Associated Press.