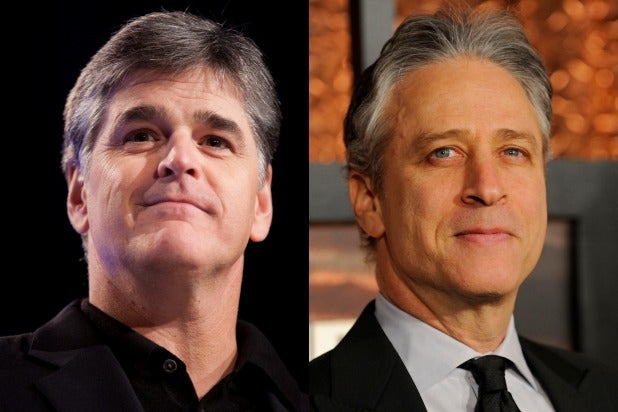 A war of words escalated on Tuesday when Sean Hannity spouted some new insults in the direction of Jon Stewart.

In an email to POLITICO, the Fox News host went off on “The Daily Show” host, saying: “Jon’s problem is he has his head so far up Obama’s ass he cannot see clearly, he is obviously better suited to reading his joke writers’ material, and making his clapping seal audience happy.”

Hannity’s barb comes on the heels of Stewart describing the conservative commentator as “loathsome” in a recent interview with Rolling Stone.

“That’s just pure cynicism, and it’s horrible,” said Stewart about Hannity’s news program. “Everything is presented in as devious a manner as it could possibly be presented.”

Hannity also wrote in his email: “Nearly 50 million Americans on food stamps, nearly 50 million in poverty, the lowest labor participation rate since 1978, and Jon’s beloved president who once said George Bush’s debt was ‘irresponsible and unpatriotic’ has almost accumulated more debt then every other President before him combined. Do I even need to remind him about keeping our doctors, our health plans and saving money? And how is that healthcare website working out? Or Iraq, Isis, the ‘Russian reset’?”

As TheWrap previously reported, Hannity was involved in a feud with Comedy Central’s Stephen Colbert after the soon-to-be “Late Show” host compared Hannity’s reporting skills to those of a 5-year-old boy. Interestingly enough, when Hannity fired back at Colbert, he praised Stewart in the process.

“He’s not as funny as Jon Stewart,” Hannity said. “Stephen Colbert will have the lowest-rated late night show. There are issues that just aren’t funny. Terrorism isn’t funny. I didn’t see the bit. I won’t see it. I don’t care.”

“I await another Rally to Restore Sanity with Fatwah supporter Cat Stevens!!” Hannity said on Tuesday, mocking the event held by both Stewart and Colbert in 2010. Singer-songwriter Yusuf Islam, formerly known as Cat Stevens, was one of several guests who appeared at the Washington, D.C. summit.