The gag was based on Hayes’ honorary Ph.D he received in 2013 from his alma mater Illinois State University, “the college I dropped out of.” He joked that it means he’s totally a real doctor.

“We are currently battling rampant misinformation about vaccine and tonight, I’m going to clear all that up,” Hayes said during the Aug. 18 “Kimmel” show. “That’s because I am a doctor and not just any doctor, an honorary doctor. That’s true. Illinois, Illinois State University, one of the greatest universities in the country — also the school I dropped out of — has bestowed upon me an honorary doctorate, which is the certificate that qualifies me to clear up any lingering vaccine hesitancy out there… not legally speaking, but me-gally speaking.” 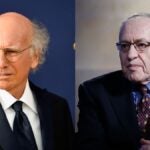 Hayes did attend Illinois State University as a piano performance major with a minor in theater and voice in the early 1990s. He dropped out despite only being “two or three classes short” because he got a job as the music director at Pheasant Run musical theater and told Illinois daily paper The Pantagraph he “was anxious to start on life.”

Anyway, this doctorate, even though it’s definitely not a medical license, was Hayes’ segue into a segment he nicknamed “*Honorary Dr. Sean’s Covid Corner.”

Remember that time at the onset of the coronavirus pandemic former president Trump seriously suggested people do bogus things like inject themselves with disinfectants or expose themselves to “very powerful light” to “cure” the virus? Hayes was eager to remind us.

“Here’s a question I get all the time, do the vaccines contain microchips? Very simply no. Vaccines do not contain microchips,” Hayes said. “They contain Sun Chips, which is why they’re so effective because Sun Chips are made with sunlight — the same sunlight a former president suggested we shine into our buttholes.”

Another question Hayes “answered” was, why get the vaccine if the MyPillow guy Mike Lindell is against it. Lindell is definitely publicly anti-vaccine though it’s unclear if he’s gotten one — the Trump loyalist and election fraud conspiracy theorist has said coronavirus vaccines are demonic and called them “the mark of the beast.”

“Look, I understand the appeal of the MyPillow guy. We have similar backgrounds and that we both used to sleep in trash cans because we were being hunted by the devil,” Hayes said, barely holding back laughter at what seemed like a joke at Lindell’s past as a crack cocaine addict. “While he was stuffing pillows with old Chinese newspapers, I was earning my honorary doctorate being famous. As Einstein once said fame is intelligence, people.”

Check out the full bit at the top of the page.