Off-season, a very occasional roundup of Oscar news ‘n’ notes from around the web:

When Oscar-watchers start complaining about how the Academy Awards show is always produced by people from the movie business, rather than TV producers who might have a better understanding of that medium (that particular gripe is a favorite of Patrick Goldstein’s, for one), Don Mischer’s name often gets mentioned. Mischer, who’s won 15 Emmys and 10 DGA awards, has been responsible for a wide variety of live television events, from 10 Emmy shows to Super Bowl halftimes. And now he’s doing an Oscar show – but it’s the 2010 Governors Awards, the Oscar show that isn’t televised. Mischer, who was involved with the inaugural Governors Awards last fall, has been tapped to executive produce the event by its producer, past AMPAS president Sid Ganis. And hey, if he does a good job, maybe the Oscars await – although we should see if the Bruce Cohen, the first Governors Awards producer, lands the Oscar show before deciding that one gig may lead to the other. The press release announcing Mischer’s appointment adds that “one or more” honorary awards will be presented at the event, but that’s just being overly cautious: the new rules that were passed when the honorary awards were moved off the Oscar telecast make it so much easier to vote these awards that it’ll be a rare year indeed that doesn’t bring three or even four of them. (Academy of Motion Picture Arts and Sciences) 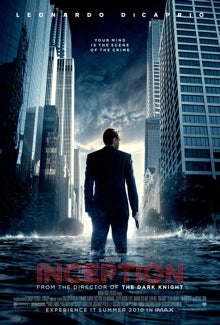 Nathaniel Rogers goes out on a big limb to offer his Early Bird Oscar Predictions in, count ‘em, 20 different categories. These are the kind of predictions that last year would have included, say, “Amelia” and “Nine.” He thinks that “Inception” (left) and “The Way Back” will pick up the most nominations, followed by “The King’s Speech” and “Tree of Life.” Of course, he is completely nuts to be doing this in April. (The Film Experience)

And Guy Lodge reacts to Rogers’ picks. “Needless to say, a hefty pinch of salt is required at this foetal stage in the competition,” he says. But he agrees that the Best Picture lineup may well contain more small movies and fewer big moneymakers than last year’s slate. (In Contention)

Sasha Stone listens to Sigourney Weaver’s recent explanations of why “Avatar” didn’t win Best Picture, and realizes that Weaver’s first comment, “Jim didn’t have breasts, and I think that was the reason,” is definitely not the same thing as her subsequent, “today it’s fashionable to give the Oscar to a small movie that nobody saw.” Asks Stone, quite reasonably, “So, what does ‘fashionable movie that nobody saw’ have to do with having breasts? Either it was sexism or it was a fashion trend.  Let’s think that through a little more carefully, Sigourney.” Touche. (Awards Daily)

By the way, the big blue movie is back: Cinematical reports that “Avatar” returns to theaters this weekend, Friday and Saturday only, in a final engagement before its Earth Day DVD and Blu-Ray release next week. Another chance to see it and come up with more reasons why it might have lost to “The Hurt Locker.” (Cinematical)