Nick Fury has a lot on his plate in the upcoming Marvel TV series “Secret Invasion,” and you can see just how much in the first trailer, which debuted Saturday during Marvel’s presentation at D23 Expo 2022.

Watch it above now.

It starts with Nick Fury (Samuel L Jackson) returning from space, looking pretty grizzled. Maria Hill (Cobie Smulders) meets him in a bar and dresses him down for not showing up to help with other unnamed problems that have presumably happened since he left Earth.

“Three years, you’ve been avoiding Earth. I have called for your help plenty of other times. And you’ve been pretty content to let those calls go straight to voicemail.”

“Yeah well. This is different,” Fury says. And it is! 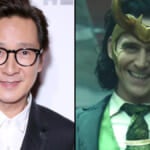 The comics sort of wimped out though, with only a few b-level heroes and villains actually turning out to be Skrull imposters. Perhaps the show will actually see some of the heavy-hitters kidnapped and then replaced.

Whatever happens, it’s pretty clear this is intended to be a paranoid thriller along the lines of “Captain America: The Winter Soldier,” with Skrull infiltrators instead of Hydra. And no, we’re not complaining. Along with Smulders and Jackson, we also saw the return of Ben Mendelsoh as Talos, Don Cheadle Kingsley as James Rhodes and Martin Freeman as Everett K. Ross. We also saw new-to-the-MCU cast members Kingsley Ben-Adir, Olivia Coleman, Emilia Clarke, Carmen Ejogo and Christopher McDonald.