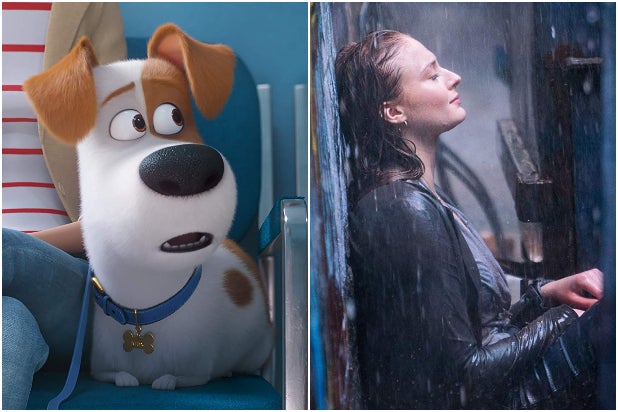 It was a bad weekend for sequels at the box office, as Universal/Illumination’s “The Secret Life of Pets 2’ and Fox/Disney’s “Dark Phoenix” arrived in theaters and opened both below industry expectations and well behind the openings of their series predecessors.

“Secret Life of Pets 2” took No. 1 this weekend, but with an opening of $47.1 million from 4,561 screens and a $97 million global opening from 21 overseas markets. The animated sequel was never expected to come close to matching the $104.3 million that the first “Secret Life” made in 2016, but it has also fallen short of the $50 million opening projected by trackers and has posted one of lowest openings ever for an Illumination release.

The only two films from the animation studio with lower openings are the 2011 live-action/CGI hybrid “Hop” with $37.5 million and the 2016 holiday film “Sing,” which opened to $35 million. The opening total for “Sing” was weighed down by Christmas Eve falling on a weekend and ended up legging out to a $270 million domestic run.

With “Toy Story 4” coming out in two weeks, it is very unlikely that “Secret Life of Pets 2” will be able to match that figure, even with an A- CinemaScore and a 4.5 rating on Postrak. But even if it doesn’t meet the high standards Illumination has set with its recent hot streak, at least “Pets 2” will make back its $80 million production budget and could still post a domestic run on a similar level to the “How to Train Your Dragon” films. Distribution execs at Universal tell TheWrap they are still pleased with the “Pets 2” launch, pointing out that it still helped push the overall weekend total up 37% over the same weekend in 2018.

“Dark Phoenix,” on the other hand, is pacing to be a bomb with an opening weekend of $33 million, according to industry estimates. That is by far the lowest opening ever for an “X-Men” film — 38% below the previous low opening of $53 million earned by “The Wolverine” in 2013 and also behind the unadjusted $54.4 million opening made by the first “X-Men” way back in 2000.

“Dark Phoenix”‘s fate was sealed early in the weekend as critics panned the film with a 22% Rotten Tomatoes score, while audiences gave it a tepid B- on CinemaScore and a 3/5 on Postrak. Between the poor reviews and the knowledge that the X-Men will soon become part of Disney and Marvel Studios’ cinematic universe, all but the most hardcore superhero movie fans seemed to have concluded that “Dark Phoenix” is a film they could afford to skip.

In the face of such weak competition, Disney’s “Aladdin” is holding well in third with an estimated third weekend total of $24 million, pushing its domestic total to $232 million, as Disney remains the only studio so far this year to release a film with a domestic total over $200 million. And while “Dark Phoenix” was a disappointment, Disney will still reap any box office revenue from that film thanks to its acquisition of Fox.

“Aladdin” has also outlasted a film that topped it on the charts last weekend, Warner Bros./Legendary’s “Godzilla: King of the Monsters.” The sequel to the 2014 American monster movie has failed to match that film’s $93 million opening after two weekends in theaters, falling 68% in its second weekend to $15.5 million and a 10-day total of $78.6 million.

It’s not an encouraging sign for Legendary’s MonsterVerse, as Godzilla is set to return to theaters in nine months with “Godzilla vs. Kong.” The box office struggles led WB studio chief Toby Emmerich to suggest at this weekend’s Produced By Conference that the upcoming film might have its release date pushed back.