Here are some things you might not know about those Oscar ballots, which began arriving in Academy members’ mailboxes this week:

The 11 different ballots come in 11 different colors, and cover 15 of the 24 Oscar categories. For the most part, each ballot deals with a single category. The two exceptions are the writing ballot, where Original Screenplay and Adapted Screenplay are both included, and the acting ballot, which includes all four acting awards.

The Academy’s sound branch has the most vibrant colors: a red ballot for Sound Editing, blue for Sound Mixing. Most other branches get subdued hues, though the yellow Film Editing ballot is pretty bright.

The envelopes in which the ballots are returned, though, only come in two colors: green for Best Picture, buff for everything else.

The full color rundown, for trivia buffs and Oscar completists only: 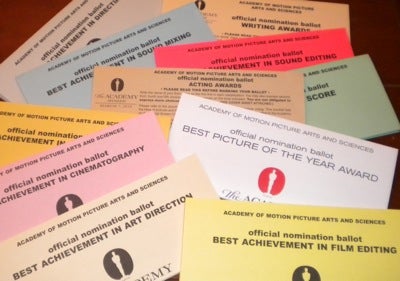 All the ballots come with an attached letter from AMPAS president Tom Sherak briefly explaining the voting process. The acting ballot comes with a separate letter from branch governors Annette Bening, Tom Hanks and Henry Winkler, which lays out “a circumstance [that] exists in no other area of Academy Awards voting,” in which voters not only select the work they deem the best, but also the category, leading or supporting, in which it belongs.

And then there’s this: “If you think that a performance occupies a middle ground between leading and supporting, you may list it on your ballot in both categories.” If a performance receives enough votes to be nominated in both categories, the letter says, PricewaterhouseCoopers will record a nomination “in the category in which it received the most support.”

(Technically, PwC tallies votes in the leading and supporting categories simultaneously, and the moment an actor receives a nomination in one category, he or she is eliminated from consideration in the other.)

Finally, if you find my explanations of the preferential system for counting votes a bit too detailed and complex, here’s the simpler rundown that Tom Sherak offers in the letter that arrives attached to each ballot:

“MARKING YOUR BALLOT: When you have reviewed the Reminder List, please write the name of your first choice on the first line of this ballot and list your alternate choices on the succeeding lines in the order of your preference. Do not list the same title more than once; multiple votes for the same picture do not enhance its chances.

“The preferential system of tabulation is used in nomination voting. You are voting essentially for one achievement, and the preferential system insures that your vote will be cast – in order of listed preferences – for the candidate for whom it can do the most good. (If, for example, the achievement on the top line of your ballot receives almost no support from other voters, you have not “wasted” your vote. The system moves on and casts your vote for your second listed achievement, and so on.)

“In order for any achievement to be among those chosen from this balloting it must have at least one first-place vote. It is important that your FIRST CHOICE be written on the FIRST LINE.

“You need not fill in all 10 lines. The more preferences you indicate however, the greater the certainty that your ballot will influence The Best Picture nominees list.”