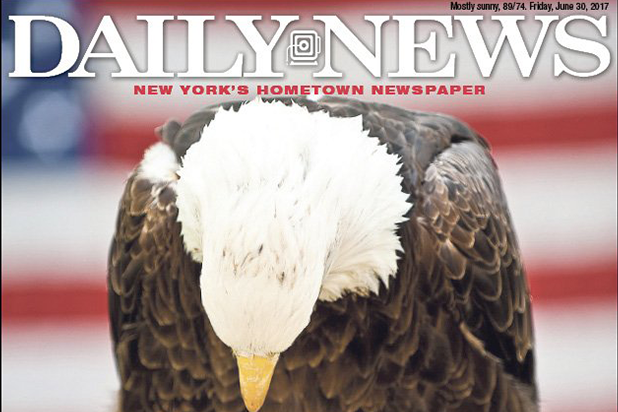 The day after President Donald Trump went on a Twitter attack against “Morning Joe” host Mika Brzezinski, New York Daily News has a cover photo that echoes the reactions of many members of the media and even several GOP leaders: That Trump’s recent online activity is a shameful moment for America.

The cover features a bald eagle with a bowed head in front of an American flag, with the headline “HUMILIATION” underneath. “Trump’s new low: sexist face-lift rant vs. TV host,” the tagline reads.

How did we get here?

In case you missed the biggest story on Thursday’s news cycle, here’s a refresher: Trump tweeted out “I heard poorly rated @Morning_Joe speaks badly of me (don’t watch anymore). Then how come low I.Q. Crazy Mika, along with Psycho Joe, came… to Mar-a-Lago 3 nights in a row around New Year’s Eve, and insisted on joining me. She was bleeding badly from a face-lift. I said no!”

This incited a wave of backlash. Everyone from Lindsey Graham to J.K. Rowling weighed in.

'Nearly all men can stand adversity, but if you want to test a man's character, give him power.' Abraham Lincoln pic.twitter.com/vkJnlXbnXg

Mika Brzezinski and her co-host Joe Scarborough and penned an opinion piece in the Washington Post on Friday titled, “Donald Trump is not well,” in response to the president’s Twitter attack on the pair. It starts off like this: “Trump launched personal attacks against us Thursday, but our concerns about his unmoored behavior go far beyond the personal. America’s leaders and allies are asking themselves yet again whether this man is fit to be president. We have our doubts, but we are both certain that the man is not mentally equipped to continue watching our show, ‘Morning Joe.'”