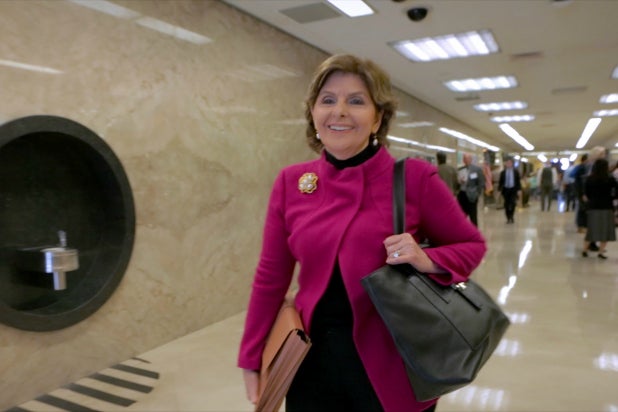 Even if you don’t know exactly what infamous women’s rights lawyer Gloria Allred does, you have  likely gleaned a few things from the cultural consciousness about her: She’s loud, attention-hungry and in “it” for the money. At least, that’s what numerous talk-show commentators and the U.S. president would like you to believe.

Directors Roberta Grossman and Sophie Sartain, then, had an almost easy task of revealing the real Allred in their Netflix documentary “Seeing Allred”: if we really know nothing about the woman, then we’re certain to be surprised. And in this film, pleasantly so.

The film opens with Allred selecting from about 20 pink suits in her closet, applying perfect pink lipstick and hopping in her sports car. The scene is impossibly gaudy. As she glides down a palm tree-lined Los Angeles street to the tune of Aretha Franklin and Annie Lennox’s “Sisters Are Doin’ It for Themselves,” Allred, in voiceover, offers a seeming explanation for that showy display. “Women depend on me to be strong, to be fearless and to assert and protect their rights,” she says. “And power only understands power.” That mini-speech is the perfect lens through which we can view this film, and Allred herself.

Grossman and Sartain jump around in Allred’s biography, from her college years and first turbulent marriage all the way up through Trump’s inauguration, but the framing device for this film is that of the timeline of the Bill Cosby sexual assault accusations. Allred represented many of the victims who came forward, and we continually return to the case’s progress. In multiple clips from press conferences, we see her sitting beside the victims, whispering in their ears and touching their arms when they tear up in front of the cameras.

If you’d only ever seen Allred at those press conferences, you might read her as an opportunist. Grossman and Sartain found no shortage of media personalities over the years stating that as fact. One such man on the now-cancelled “Nightly Show with Larry Wilmore” proclaims, “Wherever you see Gloria Allred, you know someone is lying.” But as the directors dive into Allred’s historical reasoning for holding press conferences, we see a fuller picture of the woman and the necessity for airing grievances in public.

Allred never intended to be a lawyer. She also didn’t know at first that women lacked any fundamental rights. A series of fortunate and disastrous events led her down her eventual path: Her father saved up money for her to attend college at a time when 93 percent of the school’s population was men; she married and had a child young, then endured an abusive period before she divorced and moved to Los Angeles; she got a job teaching at Watts, which led her to become a union organizer for teachers and to fight for civil rights; and she eventually met her now-ex Bill Allred, who encouraged her to go to law school.

One of her first clients was a woman who was abused by seven different priests, and when the media heard her speak, they essentially crowned her as the authority on women’s legal rights; as the documentary makes clear, there was no one else who could talk about these issues in public. Allred was it. So she either did the press conferences and talk shows and aired these grievances, or no one did. She essentially became the lightning rod for controversy to make it OK to talk about sexual assault and harassment in the workplace.

What’s perhaps most fascinating about this documentary is how sure-footed Allred has been in picking her battles over the years. In one segment, we’re shown how Allred had sued a store for gender discrimination, because they’d separated the boys’ toys from the girls’ toys and only gave the girls dolls and play vacuums. At the time, the case was unprecedented and outrageous. Allred was considered a kook. Decades later, people have finally seen the merit in her claims.

For her, the legal battles she fought — no matter how sensationalized — were fundamental fights for equality, which also fueled another one of her media stunts. For decades, she would show up at the Beverly Hills LA county clerk with her lesbian friends and invite the press to watch them apply for a marriage license. Each time, they were inevitably turned down, so even one of Allred’s law partners had difficulty understanding why she would do any of it if not just for personal publicity and gains.

Over time, he got it: Allred was normalizing gay rights, incrementally. The best twist comes when that Doubting Thomas says proudly that he was one of the lawyers who eventually argued for gay marriage in front of the Supreme Court, in part because of Allred’s tireless work. The directors play a short clip of Allred watching him with glee in her eyes as he argues the case before a lower court.

Allred says in the documentary that people ask her all the time what her endgame is. “There doesn’t have to be an end,” she replies. One of the reasons she’s been so successful is possibly because she’s not looking for a goal. She’s looking for what her longtime friend Gloria Steinem calls in the film an “explosion of consciousness,” which both Glorias seem to think we’re experiencing right now.

Every generation’s new feminists believe for a time that their revolutionary thoughts are the first of their kind. Today, Twitter activists will often decry women of the Second Wave for their selective feminism, but what “Seeing Allred” shows us is that there are those who’ve been fighting for intersectional politics from the get-go: for transpeople’s rights and gay rights, for racial, economic and gender equality. Whether or not we’ve bought into the decades-long media smear campaign against them is the larger problem.