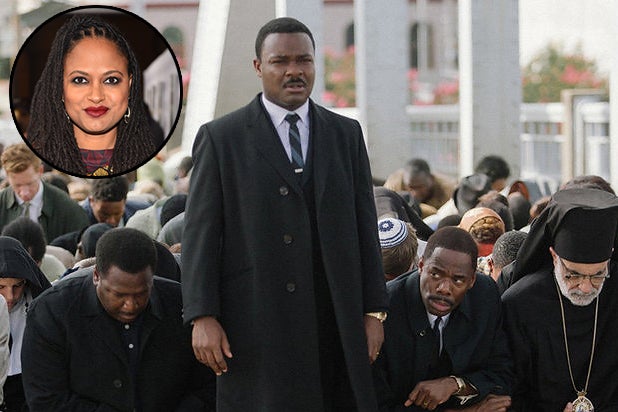 There’s a controversy brewing over screenplay credit for Paramount’s top awards contender “Selma,” although the primary players behind the film have downplayed any internal angst between director Ava DuVernay and screenwriter Paul Webb.

Webb’s original contract stipulated that he’s entitled to sole screenwriting credit should he so desire it, and as a non-WGA production, “Selma” was not subject to WGA arbitration.

But the truth is that Webb didn’t write the movie on his own, as DuVernay was just as instrumental in shaping the final film, according to an individual with direct knowledge of the writing process.

Also read: 'Selma' Review: Martin Luther King Gets His Cinematic Due in a Stirring American Saga

Because “Selma” is historically accurate, many have assumed that Oyelowo delivers MLK’s actual speeches, but the King estate didn’t give the filmmakers license to use them.

That forced DuVernay to write her own speeches for MLK, and an individual familiar with her contribution to the writing process tells TheWrap that the director performed “a page-one rewrite” on Webb’s original screenplay, changing the perspective of the story, adding nearly a dozen new characters and coming up with a new third act — the most crucial part of any script.

“This is a film by . The final film reflects her vision,” one of the primary parties behind “Selma” told TheWrap. “The speeches were inspired by, and we hope capture, the spirit of Dr. King’s words. That said, rights were not sought from the King family as the film does not use any copyrighted material.”

DuVernay and Webb discussed the possibility of sharing screenplay credit in recent months but the original writer elected to enforce the terms of his original deal. DuVernay had no way to challenge his decision because neither she nor Webb are members of the Writers Guild of America.

Webb is a British writer and as an independent filmmaker, DuVernay never joined the guild, thus the script was not subject to the WGA’s typical credit arbitration process.

For her part, DuVernay appears to be taking the setback in stride. Though she wasn’t available to comment on this story as she’s in the midst of a press tour, a “Selma” source told TheWrap that DuVernay has had a month to wrap her head around Webb’s decision, acknowledging that her making a fuss about the lack of co-credit won’t change anything.

One insider described DuVernay as “disappointed” about Webb’s decision to keep sole screenwriting credit. “I never thought someone would put their name on something they didn’t write, but I’ve learned a lot about human nature [during this process]. There’s no point in stirring the pot because nothing can be changed,” one of “Selma’s'” key creative collaborators told TheWrap.

In all likelihood, DuVernay is doing the best thing for the movie by staying above the fray and keeping the focus on the film as she seeks to avoid getting caught up in the politics of awards season. Hopefully, the Academy will reward her as the director of one of the year’s best films. If so, she would be the first black female to be nominated for Best Director, which would be an impressive achievement on its own.