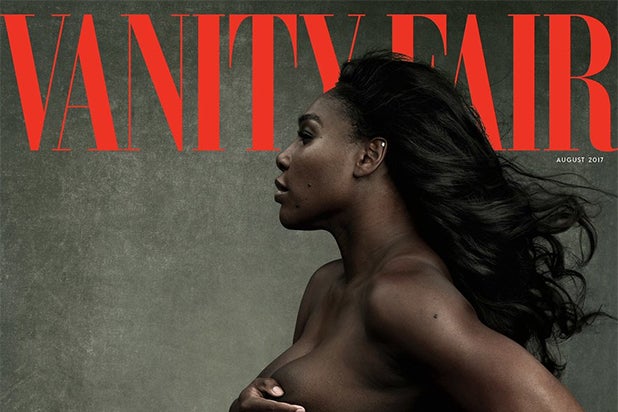 Williams and the magazine tweeted out the cover, photographed by Annie Leibovitz, Tuesday morning, asking Twitter whether they think it’s a boy or a girl.

She is set to have a baby with her fiance, co-founder of Reddit, Alexis Ohanian.

Check out my Vanity Fair Cover. Question- what do u guys think boy or girl? I'm waiting to find out but would love to hear your thoughts. pic.twitter.com/Nnq4VKCu8N

Many praised the cover, calling it “powerful” and “breathtaking.” It also bears resemblance with the famous Demi Moore Vanity Fair cover, where the actress also posed naked and pregnant.

personally i am loyal to serena williams and no one else pic.twitter.com/juIf6VrGXN

However, the cover has an added message. Many see it as a response to comments made over the weekend that undermined her achievements.

The photo shoot comes after former tennis great John McEnroe’s weekend interview with NPR, claiming that she’d only “rank like 700 in the world” if she competed against men.

“Dear John, I adore and respect you but please please keep me out of your statements that are not factually based,” tweeted Williams.

Because of this timing, many people used the photo reveal as additional evidence to support Williams’ excellence. Not only is she the best tennis player around, but she won a recent tournament — the Australian Open — while pregnant.

Number of tennis tournaments won by Serena Williams while pregnant: 1.

Number of tennis tournaments won by John McEnroe while pregnant: 0.

Serena Williams is perhaps the most dominant player to ever pick up a racket. I don't understand why this is even a discussion.

Misogynoir Madness as usual today because Serena Williams continues to have the audacity to be talented, a woman and black all at once.

"Now John would you like to apologize for your 100% accurate comments about Serena Williams?"

i love how angry conservative white guys get about people like beyonce and serena williams, just for existing and not being "yes massa"