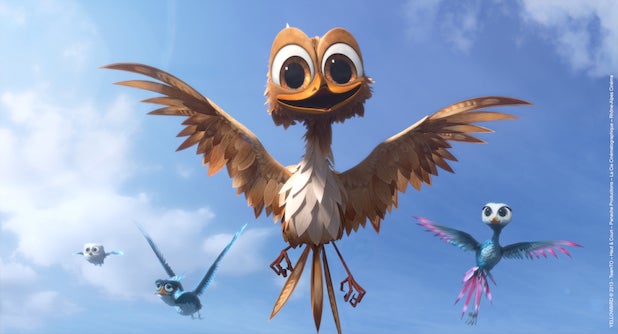 Antoine Barraud and Guilhem Lesaffre wrote the currently-in-production movie with Cory Edwards (“Hoodwinked”), and Wrekin Hill will release the film in theaters this fall.

Charting a path from Europe to Africa, “Yellowbird” is the epic story of a young teenage bird so scared to venture out into the world that he nearly misses the fun of discovering who he really is.

“We believe that ‘Yellowbird’ will capture the imagination of children, teens and adults alike. It is a beautifully written story about the power of self-discovery and community that will surely take audiences on anincredible emotional journey with its characters,” said Wrekin Hill president/CEO Chris Ball. “With films like ‘Frozen’ and ‘The Nut Job’ showing strength at the U.S. box office, it is clear that there is a real hunger for satisfying family entertainment.”

“‘Yellowbird’ is both a fable and a touching human comedy about self-realization. We are thrilled to work with Wrekin Hill as our American distributor,” added TeamTO producer Corinne Kouper.

The deal for “Yellowbird” was negotiated by Rene Cogan and Alex Mandell for Wrekin Hill with Simon Crowe for UK-based SC Films International on behalf of the filmmakers.