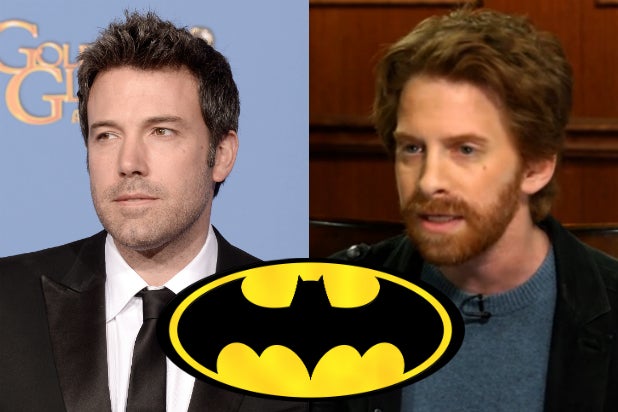 Seth Green is not a fan of Ben Affleck‘s casting as Batman in the upcoming “Man of Steel” sequel.

“Modern mainstream is accepting of interpretations of these characters with more gravitas, you know. We’re past the time of Adam West’s kind of goofy interpretation of Batman,” Green said on Ora TV’s “Larry King Now.”

The noted comic book nerd told host Larry King that he was a big fan of Michael Keaton, who played the first film iteration of the Caped Crusader in Tim Burton‘s “Batman” (1989) and “Batman Returns” (1992).

“You gotta remember that at the core of that character, Batman’s a crazy person. Batman has no powers. Batman is a rich, screwed up kid whose parents were killed in front of him.”

Green agreed with King that Christian Bale, who wrapped up his turn as the character in Christopher Nolan‘s “Dark Knight” trilogy in 2012, was “great” for the role.

But when it comes to Affleck, whose experience with playing heroes has been less than super, Green doesn’t think the Academy Award winning quadruple-threat has what it takes to stand up against Henry Cavill’s Superman in the upcoming sequel to “Man of Steel.”

King pointed out that perhaps the “Dads” star needn’t be so literal with his interpretation of Affleck’s chops.

“Affleck is a very good actor, and you’re supposed to act,” King said.

“Yes, but, there is only so much that you can act a role before people are or are not going to believe you in that role,” Green responded.

“I’m never going to play, um, you know, an MMA fighter, because I’d step into the ring with an actual MMA fighter like Batista and I wouldn’t look correct.”

See what else Green has to say about George Clooney and Joel Schumacher’s take on Batman below, and watch the full episode of “Larry King Now” featuring Green on Ora TV and Hulu.