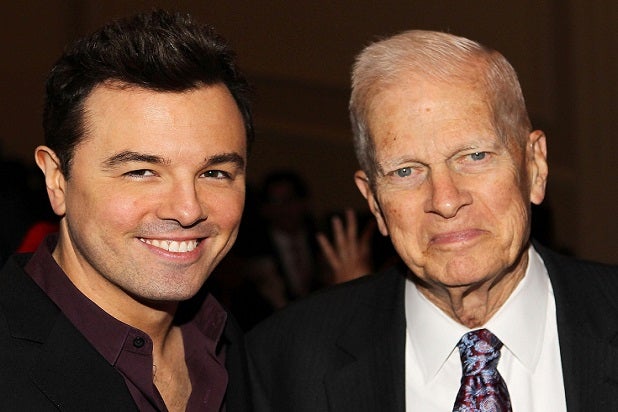 MacFarlane brought an especially earthy moment to the panel for Fox’s upcoming reboot of the classic Carl Sagan series “Cosmos” at the Television Critics Association press tour Monday in Pasadena, Calif., in response to a question about who the show might appeal to among Fox’s viewership.

The salty outburst came after a reporter suggested that “Cosmos” might find an audience among fans of Fox’s cultish, mind-stimulating shows.

“Hey, fuck you,” MacFarlane replied, apparently lumping himself in with the mentioned class.

The ear-to-ear grin suggested that MacFarlane was kidding — and it got a lot more civil from there.

MacFarlane, who serves as an executive producer on the series and was instrumental in bringing it to Fox (it will air on both that network and National Geographic Channel), talked of his love of the original series as a child. The actor and animator also naturally promised that the new version will also feature a varied array of animation, and insisted that he didn’t have to blackmail Fox into putting the series (hosted by renowned metaphysicist Neil deGrasse Tyson) into production.

“I was pleasantly greeted with enthusiasm,” MacFarlane recalled. “I didn’t have to stop doing Stewie or anything.”

Asked about his vast array of projects — ranging from the “Cosmos” reboot to the sitcom “Dads” —  which has shouldered charges of racism and sexism — MacFarlane offered that he doesn’t feel the need to strike a balance between the scientific and profane.

Back to what kind of audience the revamped science series might find, Ann Druyan — an executive producer on the show and Sagan’s widow — said that the show is eager to try to win over the non-geek contingent, and even seeks to draw people who “might even have a hostility to science.”

And while the show won’t be “dumbed down,” it certainly won’t be egghead-centric, Druyan said.

Also read: Kevin Reilly on ‘Broadchurch’ Remake, ‘Gracepoint': ‘We Have a Different Ending’

“We’re telling the great story of nature and of life and of space, and that can be done in the plainest of words,” Druyan said.

Presumably, not the same kind of plain words that MacFarlane employed during the panel.