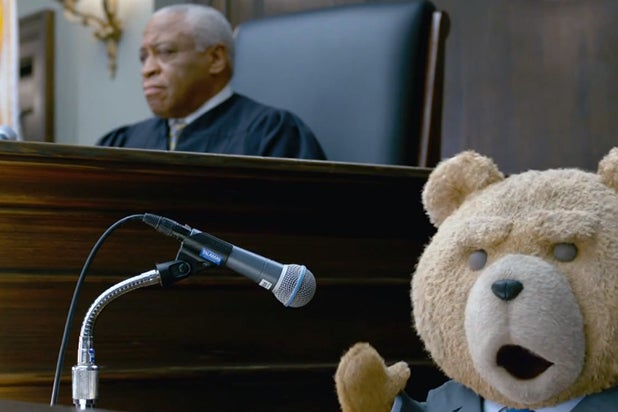 Feel free to crack open a beer in celebration, Ted. (Or maybe just pop open a cold one because it’s Monday.)

Seth MacFarlane has come out on top in a copyright lawsuit over “Ted,” his 2012 big-screen comedy about a vulgar, suds-sucking bear, with a federal judge in Los Angeles dismissing the case on Monday.

MacFarlane, his production company Fuzzy Door Productions, Media Rights Capital, Universal Pictures and others were sued in July by Bengal Mangle Productions, which claimed that the Ted character was derived from its character Charlie, “a teddy bear who lives in a human, adult world with all human friends. Charlie has a penchant for drinking, smoking, prostitutes, and is a generally vulgar yet humorous character.”

However, court papers filed in U.S. district court in California note, “Plaintiff and its counsel are now satisfied that, based on discovery produced in the action, the character Ted was independently created by using his own efforts and creativity and was not copied from Plaintiff’s Charlie character.”

In a statement provided to TheWrap, Media Rights Capital called the suit “without merit.”

Also Read: ‘A Million Ways to Die in the West’ Review: Vulgarity Heads Off Absurdism at the Pass

“This lawsuit was without merit and has been dismissed. The plaintiff has conceded that the Ted character was independently created by using his own efforts and creativity.  For the past ten years, MRC has had a front row seat to one of the most brilliant artists working today,” MRC said. “Seth’s unfiltered and genius imagination brings life to everything he touches. As both partners and huge fans, we are proud to work with a special talent and can’t wait for Seth to bring ‘Ted 2’ to life for audiences this summer.”

A spokesman for MacFarlane said that the “Family Guy” honcho “does not intend to countersue.”