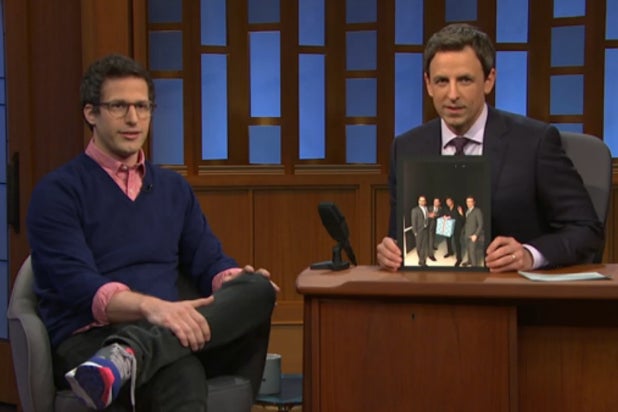 The guys went to Vegas for Samberg’s bachelor party, where the Copperfield had a pretty sweet backstage gift for the comedian: a floating Dick in a Box, referencing the famed “Saturday Night Live: Digital Short,” co-starring Justin Timberlake.

It was an ample-sized box. “He was either using magic to make it float, or he’s hung like a rhinoceros,” the “Brooklyn Nine-Nine” star said.

Samberg and Meyers later recalled how giddy they were to get the real Nicolas Cage to do “Weekend Update: Get in the Cage,” where the action star faced-off with doppleganger Samberg.

However, the two funnymen certainly do not see eye-to-eye on all humor. Take the long “SNL” history of fake-barfing, for example. We’ll let the duo debate that for themselves in the video below — you can probably guess which one of them is for and which one is against.