We’re living in an exceedingly political time, with what feels like a million insane new things happening every day. But despite the overzealous news cycle, we can’t help but continue to ponder Donald Trump’s comical and embarrassing interview with Jonathan Swan of Axios from late Monday night. And so Seth Meyers spent his new “A Closer Look” segment Wednesday ripping Trump a new one over it.

Midway through the segment, Meyers wanted to take a, ahem, closer look at the part of the interview when Trump tried to whip out a series of graphs that he thought showed that the United States was handling the pandemic incredibly well. It didn’t go well — Trump didn’t have a graph to counter Swan’s point that the U.S. has had the highest proportion of its population die from COVID-19 of any country in the world.

To which Trump infamously responded: “You can’t do that!”

“Okay, there is so much unpack here obviously, but my first thought is: generally speaking, when you’re the president reaching for a piece of paper, saying to an interviewer, ‘If you look at death…’ that’s not a great place to be. PowerPoint presentations at the office that start, ‘All right everyone, thanks for coming in, so if you look at death…’ rarely, almost never, end with promotions,” Meyers joked.

“Second, what is this chart? This is the fakest-ass looking chart I’ve ever seen. It’s just four random bars with different colors. Is this the printer test sheet?”

Meyers then joked that the graph “looks like a prop they give a fourth grader playing a businessman in a school play.” 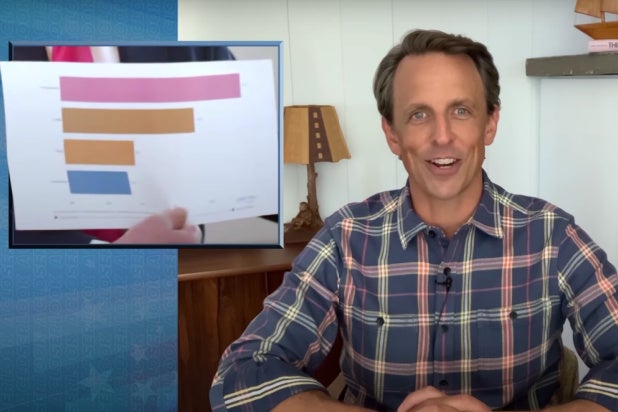 Also Read: Seth Meyers: Trump Will 'Shred Our Democracy' If We Don't Stop Him Now (Video)

“He just knew someone stuck some papers in his hand with some lines on them that supposedly made the US look good. When he actually had to explain them he froze like a fifth grader who just got the word ‘milieu’ in a spelling bee.”

Then Meyers moved into mocking Trump for what he did afterward — flee to his safe space at Fox News for an interview with Lou Dobbs that Meyers described as “beyond a softball interview.” In which Trump was asked about UFOs.

Meyers also discussed a topic broached by Rush Limbaugh on his radio show: why would Trump do an interview like this with a publication that isn’t on the “friendly side of the aisle.” An idea Meyers thought was very funny.

“At this point, ‘friendly side of the aisle’ just means anyone who won’t ask a follow-up question. Even a therapist would be too challenging for Trump,” Meyers zinged.

He was also amused by Limbaugh’s choice of words there.

“Think about that word ‘friendly.’ You know it’s bad when even the president’s allies talk about him the way a parent would warn a child to stay away from strangers,” Meyers joked.

Also Read: Seth Meyers: Trump Is 'Obsessed With Proving to Everyone That His Brain Works' (Video)

“They talk about legitimate journalists like they’re pulling up outside the White House in a windowless van.”

You can watch all of the new “A Closer Look” segment from Wednesday’s episode of “Late Night With Seth Meyers” in the video embedded up at the top of this article. Or on YouTube here.